I haven’t collected my thoughts yet, since the extreme tropo propagation from the United Kingdom in October and meanwhile a favourable weather brought the distant radio reception once again. I was travelling back home in a bus on October 23 and I was listening remotely to a radio at my QTH. Local conditions on the CCIR band were, saying the least, terrible. All nearby locations like Poznań or Wrocław/Ślęża were continuously fading down into noise.

Anyway, I’ve been notified about excellent conditions on the 144 MHz band that day, so I continued scanning. For the first time ever, a QSO was made between Spain and Poland via tropo at distance over 1900km. My location was a little too east of the ducting area, however I also found some unusual activity on the 87.5-108MHz band. At one point, I noticed that I’m listening to Ochsenkopf @ 621km instead of Zet Gold from Poznań on 99.4. The signal level was quite unstable, but it was definitely not an aircraft scatter. From time to time the signal was reaching RDS level on both 99.4 Bayern 3 and 90.7 Bayern 1, with a new local PS Bayern1N instead of previously used BR_1_FRA. 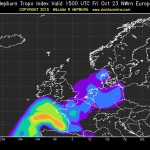 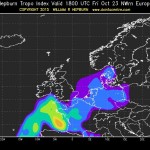 I also received B5 aktuell from Wendelstein on 105.7 and a bit later my friend Łukasz reported Hornisgrinde, which is one of the best FM transmitters in Germany. Every time I receive it here in central Poland, it produces at least a RDS PI level. I was about to reach my destination when 96.2 SWR2 peaked to 28dBf with RDS. A bit later, as I arrived to my QTH, 98.4 SWR3 also produced full PS __SWR3__ with 30dBf signal at 927km. So again, the tropospheric ducting forecasts were somewhat underestimated.

Unfortunately, all distant stations disappeared in the late evening. I was very tired that day, so I decided to sleep and check conditions in the early morning. I woke up at 5 UTC, but there was still nothing interesting, except “88.6 Der Musiksender” on 104.9. That was definitely not worth getting up that early…

At a quarter to 12 UTC I heard some classical music on 92.1 in vertical, which turned out to be nothing but HRT-HR 1!! This reminded me a tropo which occurred last year and I reported it here on FMDX.pl. It also started with many German stations (incl. Hornisgrinde), but was much more widespread and continued from Austria & Croatia next day.

Last year, I also received Trdinov Vrh, but with no chance for 94.6 Radio Sraka, as RMF FM from Poznań was audible all the time in vertical polarization. This time this frequency was clear and I heard a weak but intelligible vocal ID. This word has an offensive meaning in Polish language…

Otočac was here with a constant ~23dBf signal. However it was difficult to grab a full RDS PS due to adjacent interferences on 97.4 (TOK FM) and much weaker, but still, 97.6 (PR2). Finally, HRT on 97.525 produced an incomplete HRT-HR?? with last two characters missing, ohhh :-( Anyway, Otočac was stronger than last year and I managed to receive 102.3 HRT-HR 1 for the first time over MUZO.FM Łodź! They were playing song “Under Pressure (Ice Ice Baby)” as announced while I was listening to 87.7 and here is a proof.

As the time was passing, Zagreb was getting weaker, but closer Maribor @ 740km was strengthening up. Slovenia eventually reached RDS level on all frequencies from Pohorje, including 105.3 SLO3 received for the first time ever, woo!

The distances were getting somewhat shorter, so I initially thought that tropo is likely to end soon. Oh, how I was wrong!

In the afternoon, around 15 UTC, I noticed an odd thing – a foreign language was audible on 99.7 with my vertical antenna heading south. At first I was confused, but I quickly found a solution to this riddle. Of course it was HRT-HR 2 from Psunj @ 821km, wrongly listed as H-pol only! I tuned to 102.0 (102.015) and I received almost instantly RDS: R-OSIJEK. HKR on 103.9 was also here, but without any chance of getting RDS. Both Osijek and HKR were received only in vertical.

At first, HRT-HR 2 was “audible” in H-pol as some hissing noise in the background of PR3 from Katowice @ 272km on the same frequency. But at one point, Psunj peaked over Katowice and produced a full RDS signal in a horizontal polarization!! The difference in azimuth is only 3°. Clearly, this is a textbook case of the elevated tropospheric duct. 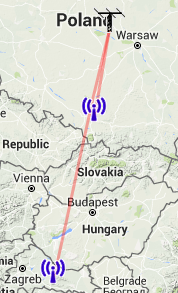 The F5LEN’s tropo forecasts were predicting tropo from Finland too… and they were right! In the evening I heard weak Turku (89.8, 98.2 – both playing classical music and 103.9) and even weaker, but matched with webstream (and MS-boost!) 93.2 Yle1 from Hollola @ 999km. Both Finnish locations faded quickly away, though. 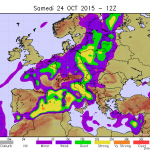 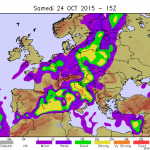 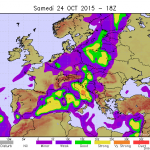 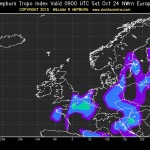 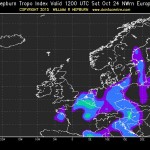 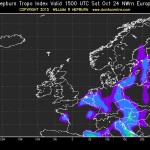 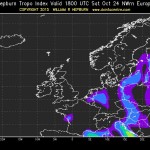