This year, the weather at the beginning of October was extraordinary. A massive high pressure system has established itself over the greater part of Europe. It was very warm and the sky was totally clear. I was pretty sure that something special will happen… now or never! All propagation forecasts were very promising at first. However, the ducting area was reduced after each update, at least for Poland. Nevertheless, tropo results were excellent – BBC reception lasted for three days!! 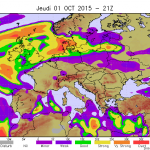 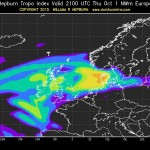 Interesting conditions on the 87.5-108 MHz band started on September 30 and October 1 night. When I was about to sleep, I found strong 95.9 DR P4 signal and 93.1 SR P2 at O=3. In the morning I heard SR P4 from Boräs on 102.9 which eventually peaked to a RDS level. In the afternoon I noticed logs between Lithuania and Holme Moss at distance 1566km. I quickly logged into my tuner, but scanning on the band revealed just a stable, but noisy 89.0 RTL. In fact it was not so weak, but due to strong local interference, a theoretically noise-free signal became a weak one. As the time was passing I also received other German stations, but that was nothing special at all.

Few minutes past 15 UTC it seemed to me that I can barely hear some English talk on 93.7 mixing with NDR 1. I ignored that marginal signal at first, but I was still checking both 89.3 and 93.7 frequencies every moment. Finally, at 15:18 UTC the sound on 89.3 fully matched a webstream of BBC Radio 2, with a noticeable latency. Hell yeah!! – despite poor forecasts, my QTH was in range of the tropospheric ducting!

Well, I have already received two BBC stations from Holme Moss in 2010. The date is very specific, as propagation occurred exactly on 10.10.10. However, that was a very patchy and weak ducting, which didn’t come too deeply into Poland. Generally such propagation occurs quite rarely between Poland and the UK. The most known tropospheric propagation in our community took place in late 2007. Maciek from Góra Kalwaria near Warsaw has set a 1706km FMDX tropo record. He logged BBC Radio Scotland on 93.7 from Keelylang Hill transmitter and the reception lasted for a three following days as an extreme tropo ducting was built over Baltic and Northern Sea.

In the evening Holme Moss signals reached 20dBf+ levels. On the other hand, the local interference from power lines was still on the air and I was quite disappointed. UK uses both polarizations at TX sites, so I was able to overcome some closer stations and grab another 1440+km DX – Classic FM 101.1 in vertical with a powerful 30dBf signal at 17:18. The RDS reception was unfortunately impossible due to local on 101.2.

I also quickly discovered Meldrum on 100.5 and 90.9 which (temporary) became my new ODX @ 1503km. At first I though this is a low-power Belmont, but I carefully checked the azimuth. My 2×9-el antenna stack has quite narrow main-lobe and I found the strongest signal at Bydgoszcz and Toruń direction, which also points to Meldrum. Around 18:40 the Pontop Pike joined tropo opening with 92.9 BBC R4 and 90.7 BBC R3. 88.5 BBC R2 came in later as this frequency was busy.

Of course, UK was not the only guest this evening. I heard many stations from Denmark including some less frequent locations in vertical like 98.3 radio100 with RDS. The same frequency hosted also BBC Radio 1, but in a horizontal polarization instead. Tropo was even more widespread. Around 20:30 UTC my friend Łukasz from Tomaszów Mazowiecki noticed a fair signal from Norway – Lyngdal and Greipstad. Few minutes past 21:00 NRK Petre 95.0 peaked to stereo & RDS (30dBf) here near Płock, Poland.

Local interference has already started to fade down at night, however the direction to UK still had somewhat increased impulse noise level. Because of high signal I was trying to receive at least a PI code on BBC R4, and I got C204 around 21:40. Few minutes later I saw full BBC_R4__ PS on a screen! Unbelievable! I haven’t ever expected to receive any UK station with RDS via tropospheric propagation…

Luckily I have recorded a video that includes a weather report. The daily temperature amplitude reached 24°C in Scotland. I guess this is the first reception of British station with RDS in Poland. The distance is also amazing – 1443km. Due to interference from other signals on 93.7 and around, the RDS demodulation was impossible on Körner 19.3 in H-pol, so again my vertical 2×9-el antenna stack was priceless! 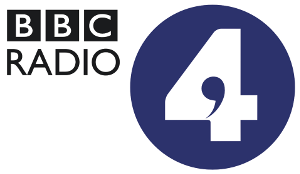 Tropo was still extending and strengthening over an entire night. I received many low & medium power stations from Denmark, Sweden and some big ones from Norway. 98.1 DR P4 Aalborg reached 47dBf and this was a fully sufficient signal level to beat my semi-local PR2 @ 33km on the same frequency. The difference in azimuth is around 35°.

Lyngdal was getting stronger and stronger… and finally peaked at 3:30 UTC to an extreme signal 40dBf @ 1020km! From time to time I checked Pontop Pike and Holme Moss frequencies. Stations from UK were still here almost all night long, however I was focusing mainly on Scandinavian signals.

In the morning at 5 UTC I received another notable DX – 89.5 Mix Megapol from Kungshamn, Sweden. This is my new record for a low power reception with RDS. Only 0.3kW ERP @ 836km with signal up to 22dBf.

I also got an unknown Swedish station on 103.7 in vertical. I asked Peter Körner and he identified it as SR P4. I haven’t expected that as there are two P4 locations, both in a horizontal polarization. After a short investigation we have identified this as SR P4 Väst (thx Maciek). At that time P4 was broadcasting local programme – Väst and Malmö had different playlists. Well, that’s a very interesting DX – 3kW ERP @ 788km in… an opposite polarization! After the morning peak, I decided to go sleep at 9 UTC.

In the afternoon, when I woke up, Pontop Pike and Holme Moss were still audible. Additionally I heard lots of German stations from the northern coast. Bornholm was getting stronger very quickly. I logged 56dBf signal at 16 UTC on 99.3 DR P4. This was a good sign to check other low power stations. 104.6 Nova (0.02kW ERP @ 411km!) reached almost noise-free signal, after nulling my local 104.3, which produces very strong noise interference 200-300kHz from its carrier.

After a while I heard the BB Radio identification and everything became clear. In Pritzwalk, Germany, there is a very high power BB Radio transmitter on 104.3. Strong tropospheric ducting wiped out the local signal on 104.4, that other locations used for FM rebroadcast. Not bad! The following video includes BB Radio jingle at 00:05.

This is not the only issue I have heard. Maciek from Góra Kalwaria, near Warsaw, notified me about 101.8 from Helpterberg which randomly switched its NDR Info programme to a different German station. Luckly, we heard a jingle which revealed the second station. It was delta radio. Maciek recorded the identification:

I got much stronger signal and I noticed that delta radio sound was interfered, but I didn’t record a jingle. This strange behavior can be also heard on my video at 0:00, 0:50, 0:54, 0:59, 1:10, 1:32, 2:10 and 2:13. The signal quality of delta radio was getting more and more noisy. How was that possible? The only thing that comes to my mind is the RDS AF function that attempts to find another frequency. But does such 100kW transmitter use FM tuner for the audio feed?

Around 17 UTC I noticed other British stations on 95.9 and 100.7. The first one was BBC Radio Humberside from High Hunsley @ 1356km and the second Heart from Bilsdale West Moor @ 1392km. Both around 10kW ERP. Finally, something other than nationwide BBC channels!

The tropospheric ducting increased its power on a half way to the UK. I received 93.6 Radio Syddanmark with RDS at 753km and only 0.08kW ERP. I think I should make some hall of fame for low power tropo DX. This one is actually a very low power one, less than 100W.

I was regularly checking 99.5 frequency for the BBC Radio 1 presence, but only N-JOY was here with a nice signal up to a RDS level. Around 18 UTC I heard some massive modulation on this frequency. That was definitely not N-JOY anymore. After a short while I heard English speaker and… the jingle “This is Annie Mac – BBC RADIO ONE”! Awesome, Black Hill here in central Poland via tropo! Am I dreaming…?

Switching to 95,8 revealed BBC R4 from the same location. Distance from my QTH to Black Hill is exactly 1570km and this is my new distance record. A bit later I also logged BBC R3 on 92.1 using a narrow 32kHz digital IF filter.

Meanwhile, I found few stations from the Netherlands on my vertical antenna: 88.0 NPO 2, 94.8 NPO 4 from Smilde and Radio Noord 97.5 from Groningen.

I checked other frequencies from Bilsdale West Moor and I matched 91.2 signal with BBC Radio 3 on 90.7. Classical music easily fits in narrow filters, so I set bandwidth to 36kHz. BBC Radio 4 on 93.4 was much more difficult to hear. At that time, R4 was broadcasting a radio play. I switched between 93.4 and 92.9 several times to make sure this is definitely Radio 4. The signal level was very weak so I used a 15kHz filter. Audio matched with 92.9 R4 each time! The recording of this reception (and other) can be heard on my tropo log, with short snippets of Pontop Pike as reference.

This evening was the last time I heard Holme Moss.

In the morning, after about 4 hours of sleep, Pontop Pike was still here around 7 UTC. I also found Mogilev on OIRT band with weak levels from east. The UK ducting path shortened around 8 UTC and this was definitely end of BBC reception… hopefully not for another 5 years! Three following days with Pontop Pike via tropo in Poland. What a propagation! In total, I received 17 stations from the United Kingdom:

As the ducting path has shortened, I received lots of interesting Danish stations including Varde and Ølgod with RDS.

… and this was the end of this massive tropospheric propagation, the greatest one since 2007.

In total, I logged 101 stations for the first time ever (marked as [1st] in logs). More recordings of each received station are attached to my tropo log. You can view it sorted by the date of 1st log by clicking on a column header.

There are all propagation forecasts that I have collected – W. Hepburn & F5LEN and the pressure map:

3 thoughts on “October 2015: extreme tropo from UK in Poland”