Another auroral propagation appeared on December 20. I don’t really remember, but it was probably third or even fourth big show of such nature this year. Aurora happens usually during the months around the equinoxes, so nice to observe it in late December. In the afternoon I noticed some distorted stations fading in and out. Stronger signals flooded entire CCIR band around 16 UTC. I quickly identified SR P1 on 89,4 with their “bell” jingle and many other frequencies of P1. Norway was also here with 88.7 NRK P1 (//web). The signal levels have increased even more, so I decided to grab a camera and try to take a photo. 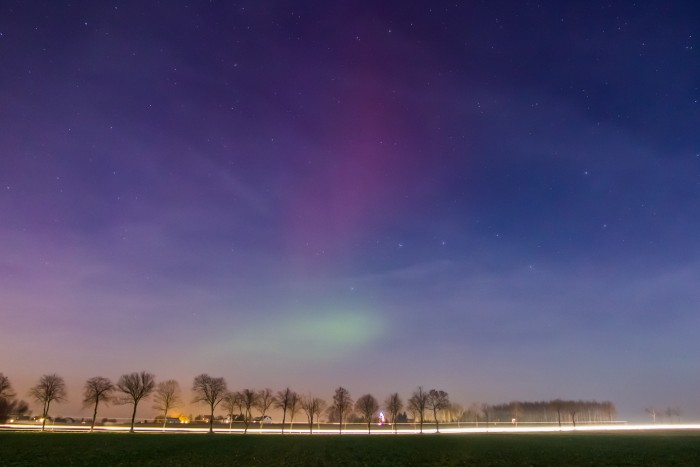 The weather outside was fairly good for observations, beside a strong light from a moon and some thick trails on the sky. I took this photo at 15″ exposure, f/4.0 and ISO 1600 with Canon 550D. I post-processed it in a some way, because the sky was too bright.

The following video shows NRK P3 reception from Bjerkreim on 91.8 that I recorded while I was out. After the FM demodulation, only bassline is well audible. The higher frequency, the stronger noise is. This is a nature of an auroral propagation as the frequency is randomly shifted due to Doppler effect. For better intelligibility I applied a slight low-pass filter. ID at 6:18.

While I was taking photos I noticed that aurora is moving from north-east to north-west. This movement was also audible on the radio, because lots of stations from UK appeared later. Łukasz in Tomaszów Mazowiecki received many BBC stations in the evening. Maciek in Góra Kalwaria got additionally RTE from Ireland and he reports his logs on RADIACJA blog (or in Polish here).