When I was a kid I used to spend holidays in the countryside. Internet access was not widespread those days, especially outside cities. Mobile data services were available only via 2G technology (GPRS and subsequently EDGE) but that was very expensive. On the other hand, the 2.4 GHz Wi-Fi band was quite popular among ISPs (Internet Service Providers) using outdoor equipment  in 802.11b standard. In the 2005 I got an offset dish antenna, so I could be online also during holidays.

Sometimes I was scanning the Wi-Fi band to check what is going on around. In the summer of 2006 I accidentally logged a few odd networks with names indicating distant places. I knew some of them from car trips to my family. That was a strange experience, because it was difficult to receive a signal at a distance of few kilometres and suddenly I found many networks located 50-70 km away and more, with no line of sight. After that I learned about radio propagation and its capability of signal range enhancement due to special weather conditions. It has become an interesting phenomenon for me. Later I also decided to buy an antenna rotator.

Throughout the next summer of 2007 I had observed the tropo propagation on 2.4 GHz band several times. Once I reached a distance of around 180 km which was simply amazing. In the late 2008 I replaced my previous antenna with Andrew 26T-2400 grid (24 dBi). The wind load was much lower, which was good for my weak rotator. However I lost the interest in Wi-Fi DXing due to poor results. My antenna was installed only at a height of 6 meters above ground level and I was not able to put it any higher.

The idea of Wi-Fi DXing returned in the 2015 because of a new 5 GHz Wi-Fi connection record in Poland established at a distance of 250 km between two mountain peaks. This event received a considerable nationwide media coverage. I was still wondering is it possible to reach such distances via tropospheric propagation beyond the horizon. Wi-Fi networks use wide channels at low power. That makes DXing much more difficult in comparison to narrow-band emissions like CW, SSB or FM. There were no reports of Wi-Fi DXing available anywhere. Anyway, my experiences were positive, so I decided to give it another try.

I built a simple and low-cost 5 GHz DX system. I bought an used 31 dBi grid antenna and I installed it together with Routerboard Metal 5SHPn radio at a height of 8 m in a horizontal polarization. Unfortunately, almost all directions were obstructed by trees or other obstacles and only a very narrow section was exposed for tropospheric ducting attempts.

I also started to work on a software for wireless network scanning and logging called MTscan, dedicated for Mikrotik RouterOS based devices. After some successful initial tests, I added a rotator to my setup. Initially I was using it manually with 12 V battery, simply by switching the polarity. Then I also designed my own controller. 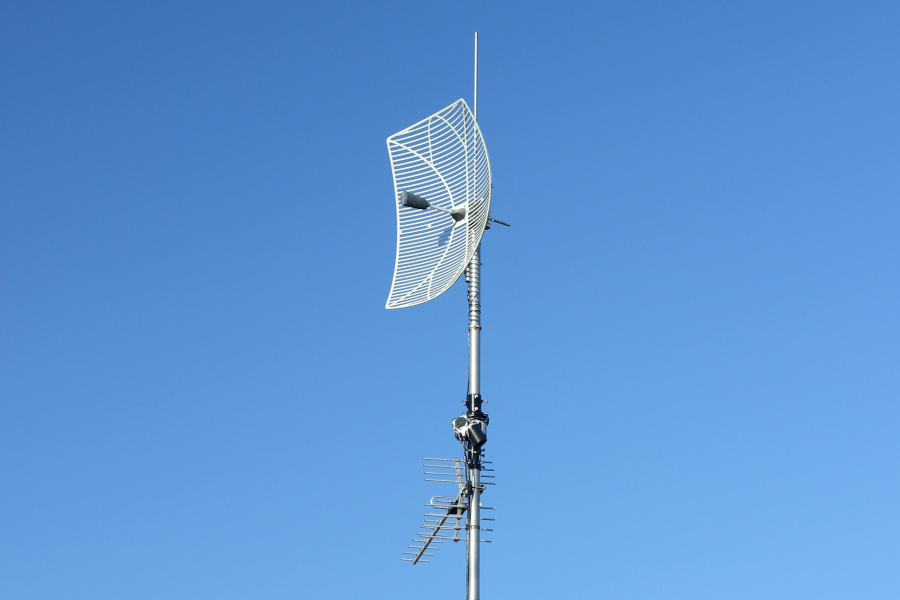 Finally, few months later, I got what I wanted. During a very strong tropospheric ducting propagation in October 2015 I logged many distant networks, including a different country – Czech Republic, which so far was impossible in my central location in Poland. I also successfully identified and spotted my new DX record at a distance of 346 km, despite it being just a single received packet. After that I decided to start saving money to build a better setup for DXing which would cover 90% of azimuth, instead of just… 5%?

In the late winter of 2017 I developed a software for rotator remote control and I implemented support for it in MTscan. Since then I have been able to log exact azimuth of each received packet. I also added a special radar mode, where antenna continuously rotates back and forth within a specified azimuth range. My Wi-Fi DXing setup has become fully automatic.

During the spring of 2017 I did some initial tests at a greater height. I installed a small 24 dBi dual-polarization panel antenna with a built-in radio (Mikrotik QRT 5) at the top of a temporary 15 m mast. The first short attempt during weak radiation inversion in the evening revealed some tropospheric signals, which were still unavailable with previous antenna, 10 meters lower. 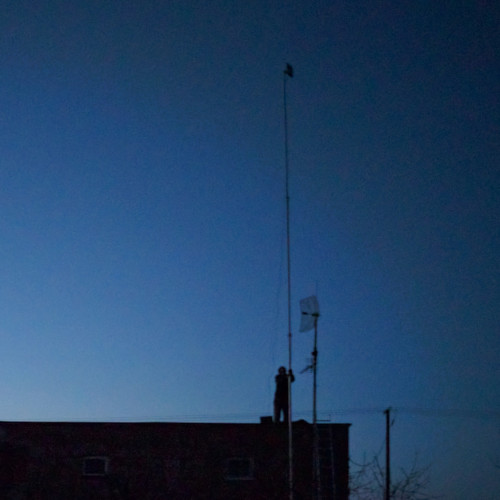 Almost two months later I was finally able to compare the reception during tropo overnight. Well, the numbers were clear:

This height was still a little insufficient because of some tall trees around. Few weeks later I upgraded the mast to 18 meters. Such a huge length required additional stabilization though. At first I installed my camera at the top to take photos around, then I tested the antenna. The overnight results were excellent, because I was able to log up to 10 times more networks from a given direction in comparison to my previous setup with grid antenna. 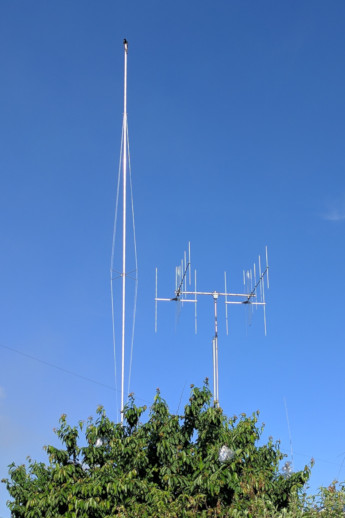 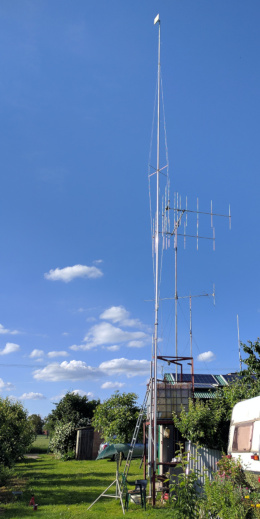 The conclusion was clear – a stationary mast around 18 meters is a must. Over two months later, at the end of August, the mast was completed and ready to lift up. It was made of thick-walled aluminium tubes: 80×5 mm + 70×5 mm + 60×5 mm + 50×5 mm. Initially, it had a small rotator and QRT5 panel antenna installed atop. It was erected using three manual winches without any problems.

During next week I was thinking about a new antenna. The choice was actually quite difficult, as weight was crucial. Finally, I ordered Rocketdish 5G31-AC on September 5, 2017, which is a 75 cm dish dual-polarization antenna with built-in radome. It required some modifications to install Mikrotik radio instead of Ubiquiti. The details, together with photos and a video are available there: Ubiquiti RocketDish 5G31-AC antenna.

In total, the top segment (antenna, rotator, mast) weighs 16 kg. The additional cross element with guy lines greatly stiffened the mast during lifting (this idea was carried from the temporary mast). Since then, the mast withstood strong winds, with gusts up to 31 m/s. Later I also added third level (the lowest) of mast guys to fully stabilize this construction. 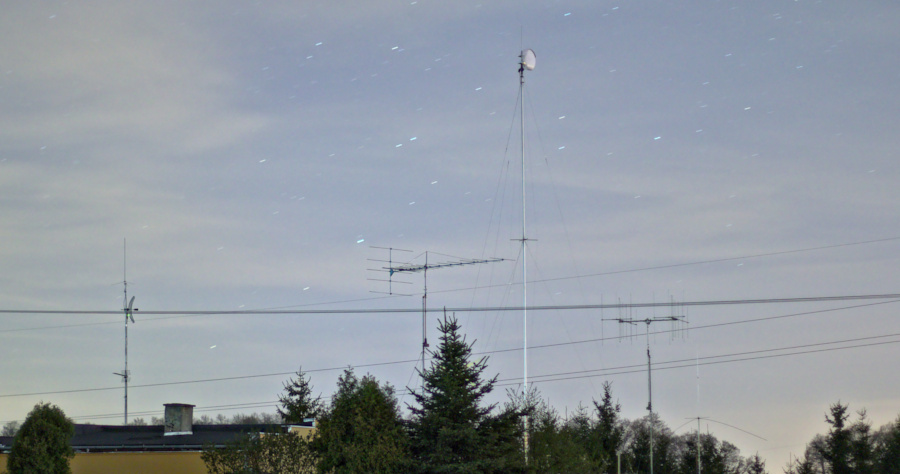 In the 2018 I revised my rotator controller. I replaced the PWM speed control with an external regulated step-down DC converter based on LM2576. I also installed all modules together in an aluminium box: 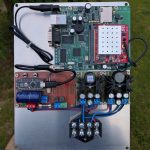 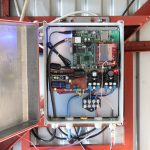 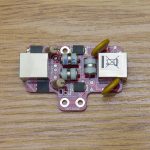 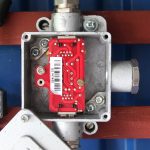 In the meantime I also was working on new features in MTscan software, like passive scanning using TZSP packet streaming (parsing beacons, probe responses, including reverse-engineering proprietary protocol beacons like Mikrotik NV2 or Ubiquiti Airmax AC). I also implemented automatic geolocation based on Wigle.net and my own database based on wardriving activity.

With this setup, the Wi-Fi DXing results were really outstanding. Throughout only the 2018 year I logged over 13000 networks up to 464 km. For a comparison, with the grid antenna installed 10 meters lower only 2000 networks were logged between 2015 and 2017. Furthermore, distances of 300 km or more have become possible quite often. In the year 2018 such conditions occurred on over 30 days in Poland. More information is available in my write-ups (currently only in Polish language, but Google Translate does a pretty good job):

Unfortunately, my stationary mast and antenna was damaged during lifting after maintenance in May 2020. The Wi-Fi DXing project was inactive for almost 4 months. It turned out that there was a problem with one manual winch. In the meantime I went on a DX-pedition during very intense tropospheric ducting opening over Baltic Sea and surroundings. That was the most successful decision ever, as I set my new Wi-Fi DX record at 745 km between Poland and Denmark.

In the summer of 2020 I built a completely new 20 m mast with a more robust rotator and a much larger dish antenna (105 cm). Instead of 2×2 MIMO Wi-Fi radio I installed two Metal 5SHPn devices, one for each polarization. The performance is simply insane. Only within 10 days of continuous stable high pressure weather in September 2020 I logged over 10000 networks, including my new stationary record @ 481 km. This wouldn’t be possible using previous setup. 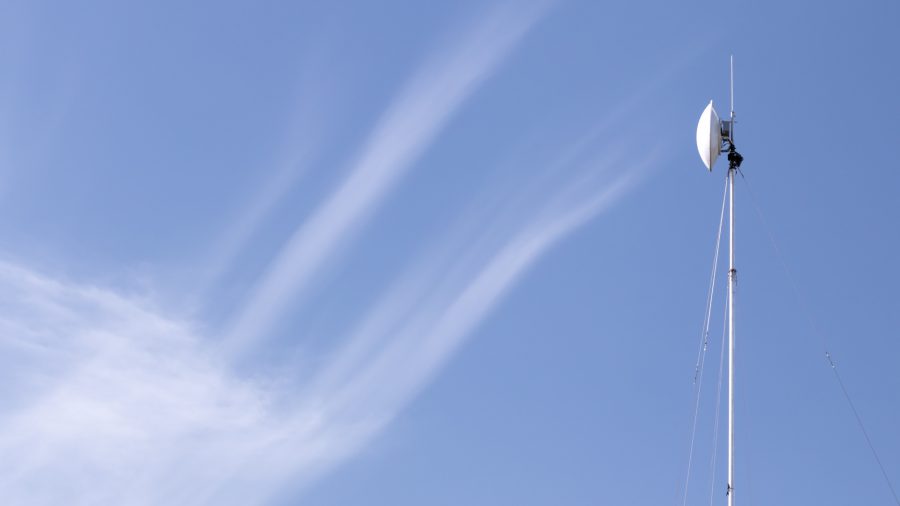 The most notable propagation reports are available below:

The cumulative log which features over 20000 networks that I have logged near Płock, Poland since 2015 is available as: 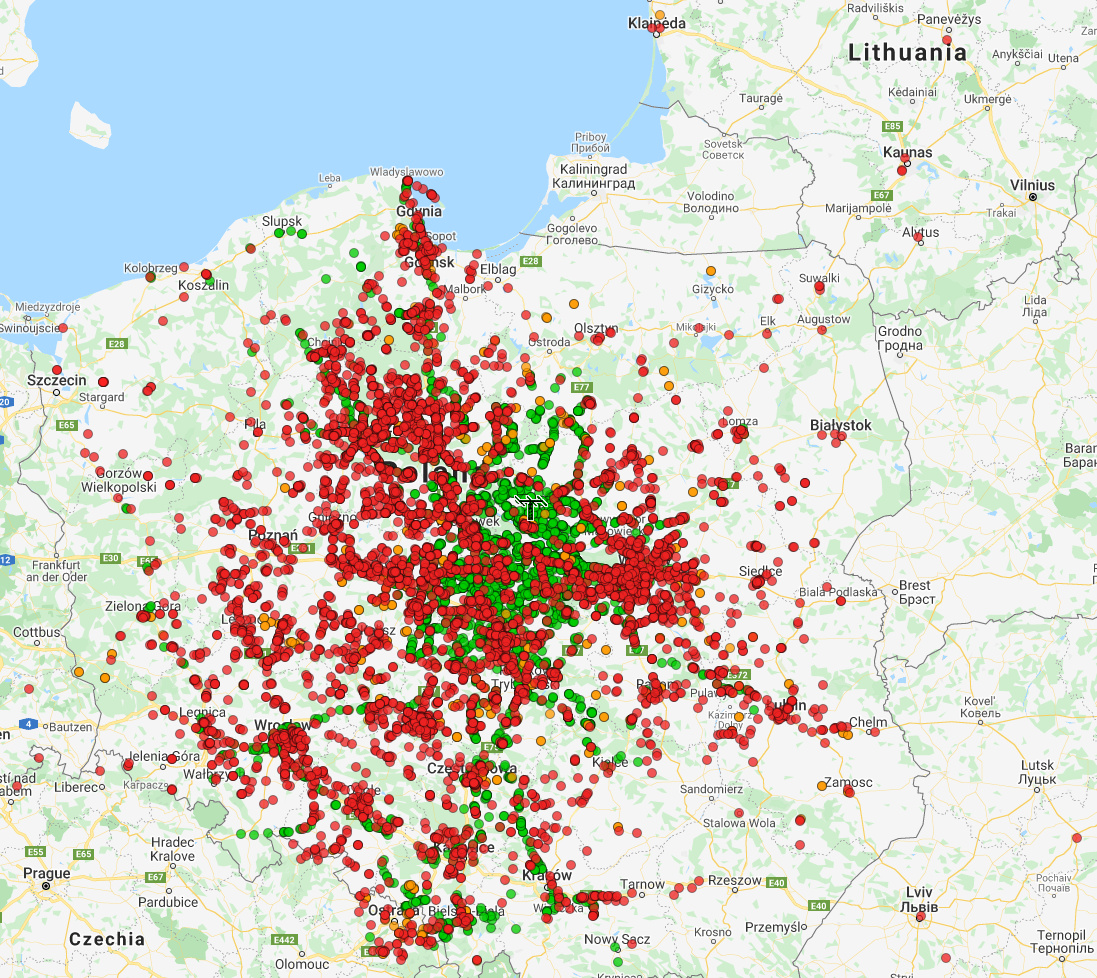 One thought on “The story of Wi-Fi DXing”