The first episode of a tropospheric propagation occurred on the night of December 29 and 30, 2019. Fair propagation conditions were already present earlier, but nothing indicated what could happen at night, just before the Monday morning. To my surprise, in the late evening, my 5 GHz Wi-Fi DX setup detected a network from Koskowa Mountain at a distance of 315 km (SSID: HyperNET_Koskowa_Lanckorona). It was just a single received packet though. I checked the overnight propagation forecasts and accordingly configured automatic antenna rotation to azimuths between 160° and  260°. Then I went to sleep.

It was a great surprise when I checked the logs in the morning. The list of received networks was mostly red, which means that the distances had reached values of over 300 km and more. Unfortunately, this time I disabled sound notification, because I had to get a good night’s sleep. Looking through the list I noticed some German words: SchillRu (AP1-Zuse Hochhau). So… finally, I logged a very first Wi-Fi network from this country ever.

Tropo started at 4 UTC with signals from Zielona Góra (300 km) and  developed towards south over time. In total, I counted at least four German Wi-Fi networks.

The first one named OL22.wdsl.ol.de was present for more than 40 minutes and reached a signal of -74 dBm at peak, which is an excellent result for a such distance. This is also my new record of level versus distance. None of the above networks are available in Wigle.net geolocation database, so the only way of identification is a manual analysis of all received signals. What’s interesting, internet service provider company WDSL-OL provides a map of their base stations.

As can be seen in the map above, German signals were not the farthest ones during that troposhperic propagation opening. The ODX title goes to Czech network RW-DC-SNEZ-PPB1. The location was determined with Wigle.net, but the network’s name itself also suggests it: Děčínský Sněžník (438 km). Well… this is the farthest network, that I have ever received from Czech Republic, but the overall record was not broken, which is still Ukraine (464 km) from year 2018. I also logged another network at the same azimuth, namely total. Perhaps it’s got to be also around here somewhere.

The distant signals were showing up from a quite narrow range of western azimuths (240 – 260°). My antenna was rotating back and forth much more widely (160 – 260°), making the tropo reception possible only for 20% of the total time. I believe that narrowing the azimuth range to the tropospheric ducting area only would give much better results, especially in relation to quantity of German networks.

On the day before the propagation, the pressure in my location reached almost 1040 hPa, and on the evening it started to drop pretty quickly. At night, the temperature at a height of several meters oscillated around 0 °C. An atmospheric sounding performed in Wroclaw at 0 UTC presents a layer of warmer and dry air (a sharp change in the dew point temperature).

As the time was passing by, the propagation area was moving. Just before a loss of the last German network signal some southern locations appeared, such as Ustroń, Poland (325 km), and later also Zlatý Chlum, Czechia (314 km) and Havířov, Czechia and the surrounding area (~320 km). Tropo weakened greatly at around 6 UTC and the distances began to shorten.

Within two days, the high-pressure system was partially displaced by low-pressure system from the north. The level dropped by as much as 25 hPa. However, at the turn of the new year, a high pressure system began to sweep in from the west into Poland once again…

Tropospheric propagation actually began a day before, i.e. January 1 on New Year. Tropo affected mainly the reception of broadcast radio frequencies. On the FM band (87.5 – 108 MHz) I logged BBC Radio 2 and 4 from Holme Moss (1443 km), as well as Dutch stations from Smilde at RDS level (899 km) and a very large number of German signals. In the evening the tropo began to shorten, and closer signals were getting stronger.

On the night of January 1 and 2, I set the automatic 5 GHz scanning to the 160 – 340° range and I went to sleep. As expected, the microwave tropo started at night, more precisely a few minutes past 3 UTC, when first distant networks were logged from the north-west (Koszalin), from the west (around Zielona Góra) and from the south (incl. Ustroń). Before 5 UTC, the maximum distance increased to 355 km to the south-west, as far as Świeradów-Zdrój.

The extraordinary microwave tropo lasted all day. In the morning I took a short nap, but to my surprise the propagation was still up and even getting stronger. The tropo peak occurred around 13:20 UTC. At that time, a new record of signal strength in relation to distance was broken. It was the MHT2-EW4N network from Ustroń at a distance of about 325 km with a level of -66 dBm, almost like with a line of sight! It is difficult to determine the exact location of this network, but the abbreviation MHT probably points to the Manhatan estate in Ustroń. 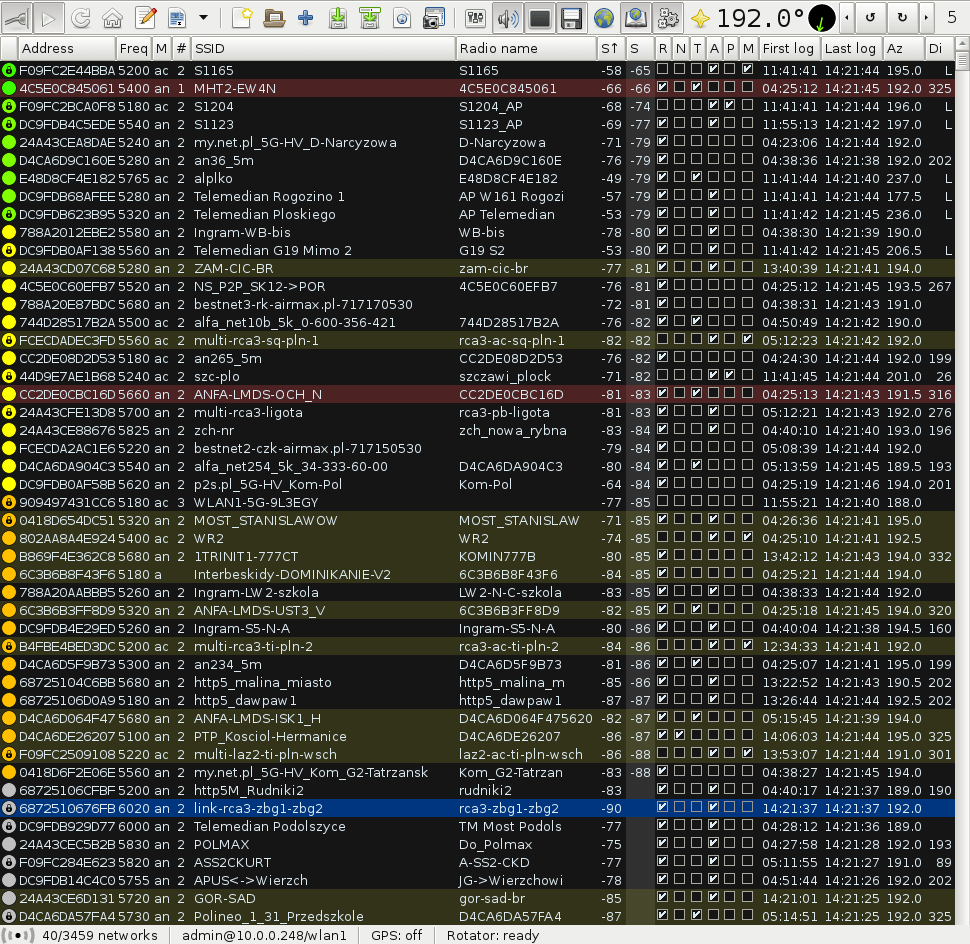 Czech signals also reached record levels of up to -68 dBm an hour later, at 14:20 UTC. The strongest Bv-Ss network is probably Sedliště, Bezručova vyhlídka (viewpoint) at a distance of 332 km. In the photo available in the Google gallery one can notice few parabolic antennas. The record  in relation to the count of logged Czech networks was also broken. This time I counted about 100 Wi-Fi networks from Czechia, received as far as here in Płock. The following table presents a list tentative and identified signals from this country …

In addition, Police near Szczecin (IPEC networks) appeared at a distance of 364 km, which set the maximum distance on that day.

Just before 15 UTC the furthest signals (300+ km) disappeared. It was just after fantastic sunset show. I will not forget this view for a long time…

The extraordinary propagation continued, but the obtained distances were generally getting shorter and shorter. At moments, there were short flashes with interesting locations, such as many Wi-Fi networks from Jastarnia, Poland (Hel Peninsula) just before 20 UTC as well as Władysławowo (260 km). 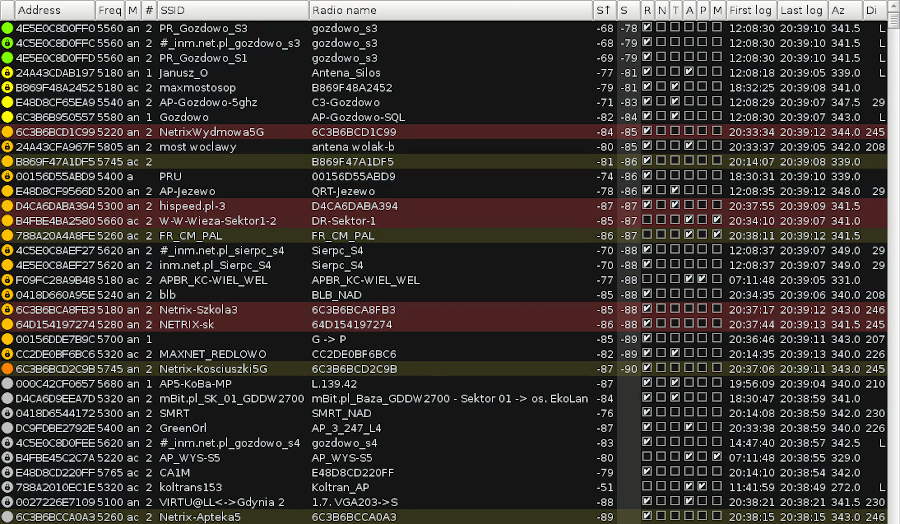 In accordance with forecasts, the propagation weakened and faded away to the east. Late in the evening several more networks were logged from Biała Podlaska (240 km) and the surrounding areas. And just like that, the strongest microwave tropospheric ducting, I’ve ever seen, ended. In total, I logged 5671 networks (69% identified) and this is of course a new quantitative record of Wi-Fi DX throughout one single day. 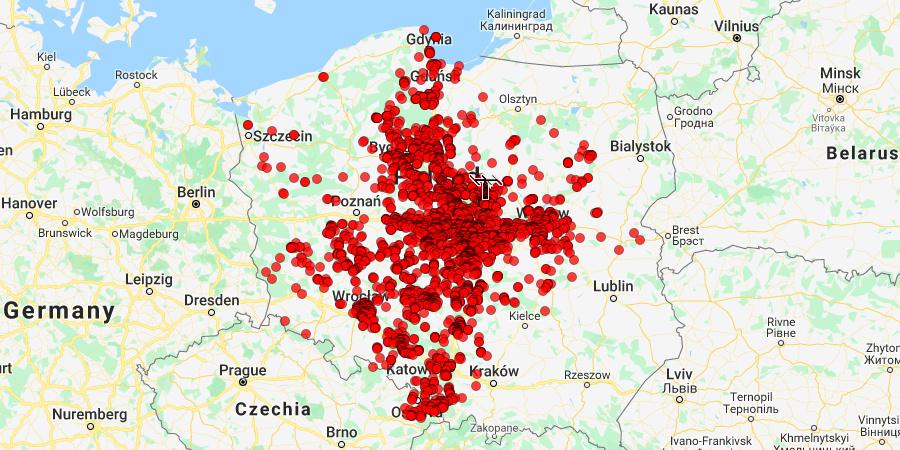 (click to see an interactive map of identified networks)

The inversion was very clearly visible in the atmospheric sounding. The chart below shows a measurement from Legionowo, near Warsaw, Poland.

By the way, at the very beginning I mentioned about inversion and optical phenomenon. It turned out that this day was also record-breaking for lovers of distant observations. Check out some amazing photos of mirages produced by the troposphere:

I wonder if I also could see something from beyond the horizon :)

One thought on “New Year 2020: Excellent inversion over Poland”