Brian Beezley, K6STI designed a 9-element Yagi for the 88-108 MHz VHF-FM band with a horizontal folded dipole and three reflectors. His antenna optimizer managed to achieve 7-8 dBd gain and F/R up to 30dB over entire bandwidth. The distance between first and last element is 100″ or 254 cm. I built two of them in 2013 for receiving vertically polarized signals and they were replaced with 2×8-el Yagi in 2021. Currently, a shortened version of this antenna is well known as Körner 9.2. 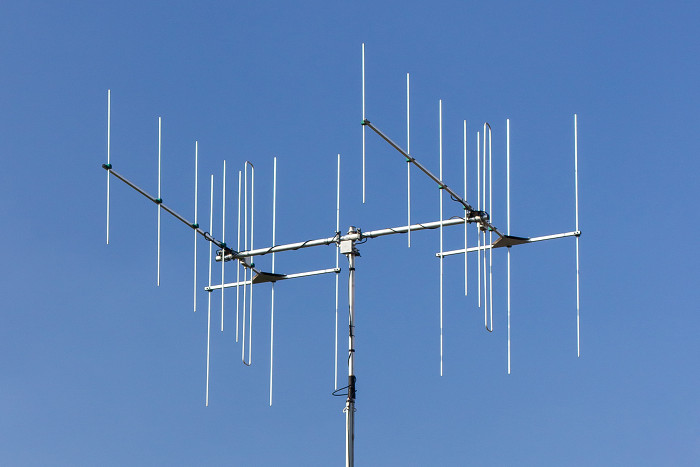 The 30 dB F/B (not F/R) ratio is preserved in vertical, as both arms of the horizontal folded dipole are inline with the vertically polarized signals coming from the behind. 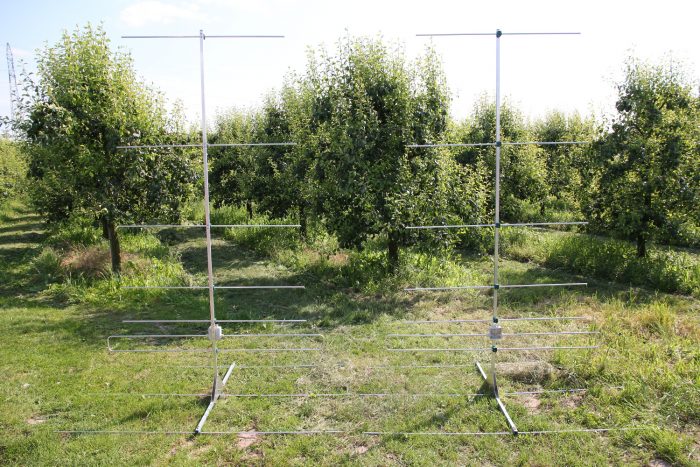 The main and reflector boom joint is made of two pieces of duraluminium sheets. 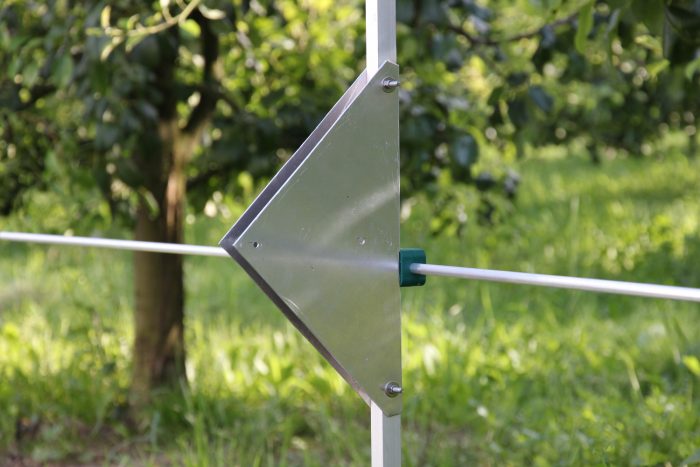 All elements should be installed on insulated mounting brackets. I used RSB RAPR-110 hydraulic tube clamps. Each tube end should be closed. That will prevent acoustic resonance. Furthermore, the water may freeze inside an element and break it in a result during the wintertime. I used some teflon plugs for that. 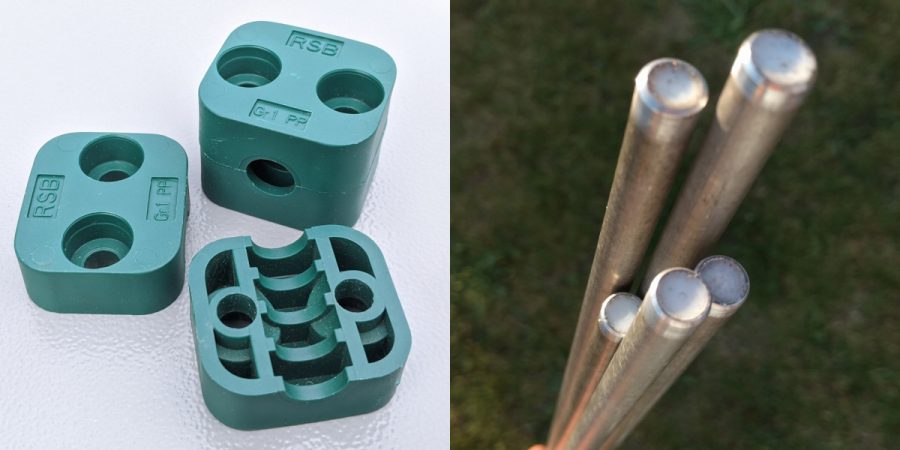 I think that bending a tubular driven element is the most difficult part of this construction. It is not so easy to bend a dipole that perfectly matches all dimensions. Finally, after some corrections, I managed to obtain a precision of each driven element of around 1 mm. 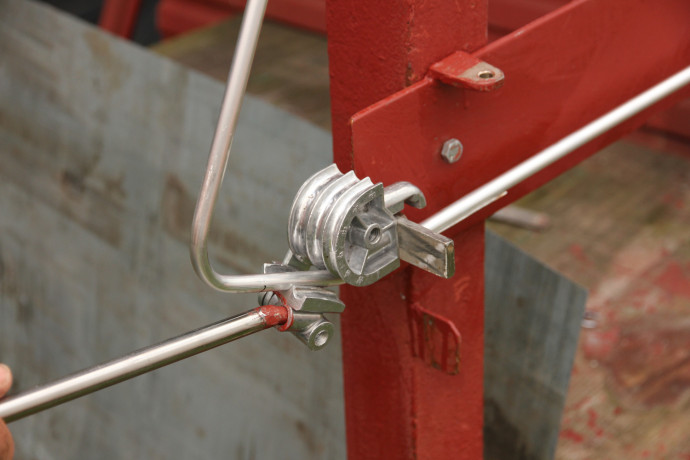 For each antenna I made a typical half-wave coaxial balun. The cable has a velocity factor of 0.84, so the matching coax segment length is 300 / 98 / 2 × 0.84 = 128.6 cm. Additionally I put a ferrite choke to reject any unwanted shield current. All connections at the feedpoint are joined with a special bi-metallic Cu/Al washers. Always use very short leads at the feedpoint, as they can introduce much stray reactance. 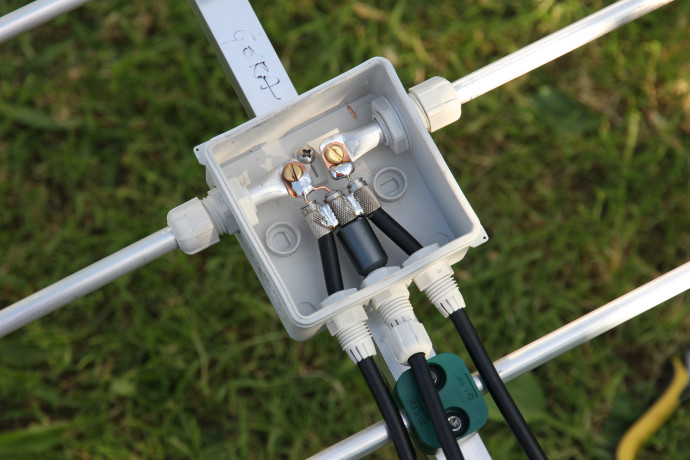 My coax has an aluminium braid, so I put a piece of F-connector on each cable to solder the balun. The cable glands should keep the water away. Additionally I used a spray dedicated for PCB coating to protect all connections.

Stacking two Yagis next to each other in a horizontal plane makes the main-lobe significantly narrower. However the mutual interaction between elements in vertical polarization degrades the F/B performance, in the worst case to around 20 dB, as the model suggest. Placing two antennas above each is unfavorable for DX-ing, because the azimuth pattern stays untouched. Stacking in a vertical plane has also another disadvantage – it is mechanically difficult.

Personally, I think that stacking distance 200 cm or a little less is the best for this configuration. The shorter distance, the wider main lobe is and the deeper nulls between main and side-lobes are. The longer distance, the bigger side-lobes are, especially at the top of the band. The changes in gain are negligible. My 2x 9-el setup has currently a stacking distance of 190 cm. The following plots compare the stack with a single antenna. 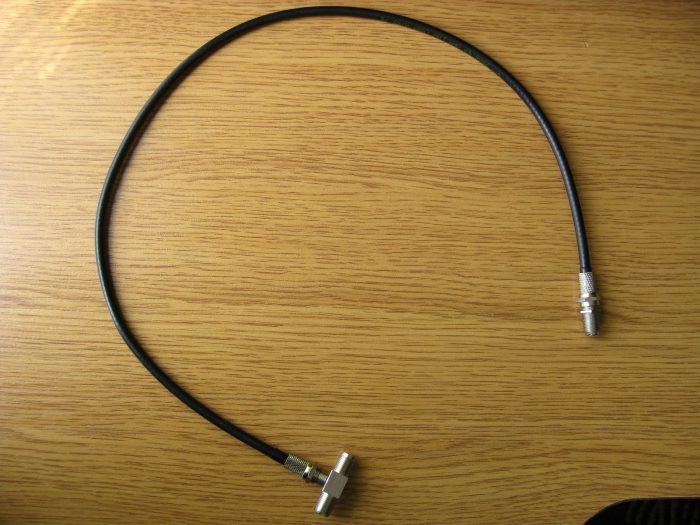 I measured the return loss using NanoVNA V2 Plus4 and twelfth-wave transformer (50 to 75Ω) with 15 m of Triset 113 cable.

The antenna patterns were measured with a modified Sony XDR-F1HD tuner and XDR-GTK software. The multipath influence is visible as a choppy signal on the following plots. Signal attenuators were required because of a very strong local signals (90.4 86 dBf, 95.2 82 dBf, 101.2 88 dBf, 104.3 104 dBf!) that cause AGC clipping.

Aluminium tubes 10×1 mm are the weakest part of this construction. Frequent vibrations weaken the material near the element mounts. While it it safe to use thick tubes for the dipole and all directors, the reflectors will eventually break after a year or two. Of course this will likely happen during winter, when they cannot be easily replaced.

The 10×2 mm aluminium tubes were unavailable in my nearby store, so I reinforced all reflectors with a short fiberglass rods (20 cm × 8 mm) at the element centers.

Furthermore, I filled the remaining space inside tubes with a spray foam. 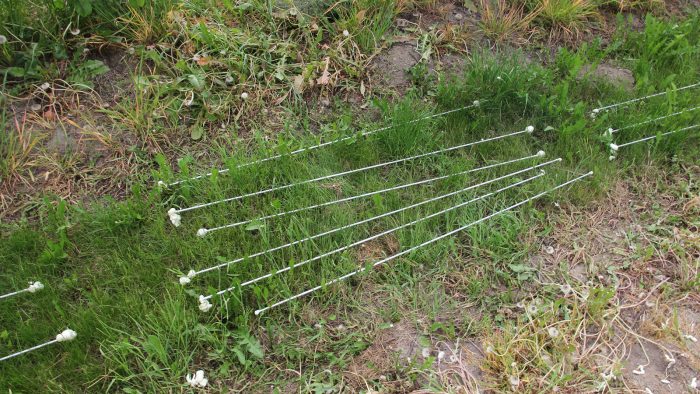 Well… this was still not enough, because the longest reflector broke again in April 2016, but this time at around ¼ of its height. Perhaps it was already damaged when I attached it to the antenna, as I do not see any other possibility. Nevertheless, I replaced the longest reflector in both antennas to an alumiunim rod and so far the problem is finally gone.

The following plot compares the pattern before and after the replacement. What a difference! The broken reflector actually acted as a director, especially for the bottom of 88-108 MHz band. 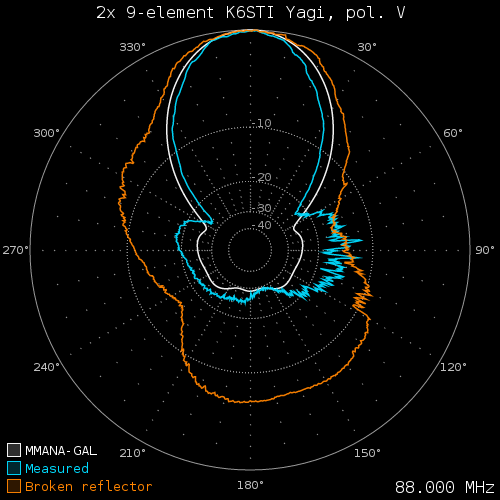 I really like this antenna. If I could I would build another two of them for the horizontal polarization, instead of my Körner 19.3. I can’t utilize the excellent F/B performance because of a strong multipath interference and narrower main-lobe could give interesting results. Unfortunately, the horizontally polarized Yagis in a horizontal stack are mechanically difficult.

Although the reception is much more propagation dependent than just the antenna, it is worth mentioning about real-world FM-DX results. The following list contains stations which I have received in central Poland via tropospheric ducting propagation in few last years:

The following video presents the rotation of my initial 2× 9-el setup in July 2013. An extended stacking distance over 220 cm provided a sharp main-lobe with deep nulls, but also awful side-lobes, reaching -10 dB at the top of 88-108 MHz band.