The enhanced propagation conditions continued from late October to the beginning of November. All upcoming forecasts were very encouraging and I have experienced the most extreme tropospheric ducting propagations from Norway, Sweden, Denmark and Germany in terms of signal strength. Tropo was also very strong on microwave frequencies and I logged 300+km 5GHz WiFi networks, including Czech Republic again! Finally, I heard a very long awaited location – Kyiv, my new ODX from Ukraine!

In the morning I checked my tuner remotely and I heard Radio Kuku from Tallinn @ 828km, which I had just received a few days before with full RDS. However, this time the signal was much weaker, but still audible well above the noise level. A few minutes later I also noticed a Sporadic-E opening which brought some stations from Norway and Sweden with MUF up to around 95MHz. It is a quite rare thing at this time of year. There was nothing more interesting on the band via tropo, except a weak Radio Elmar on 99.0 and some high powers from Riga, which I logged a bit later.

In the afternoon there was no sign of Estonia anymore, but strong Lithuania, Latvia and Belarus appeared instead. On 103.8 I heard Polish station Znad Willi from Vilnius. Nice to hear my native language from a foreign transmitter. A bit later I noticed that Rīga was getting stronger, so I focused mostly on Latvian stations. I received Daugavpils and Rēzekne for the first time via tropo ducting instead of a regular aircraft scatter, both with RDS. More details are included in a log below.

Good to see that LR 2 includes its location identification in a radiotext. It may be useful for Sporadic-E openings, as there are two LR 2 transmitters on 101.0 MHz. Of course, during tropo this is not a problem, because Liepaja and Rēzekne use opposite polarizations. I logged a following RT on 101.0 from Rēzekne in a horizontal polarization:

In the evening I rotated my antenna to S/DNK direction. Norway was already waiting on several frequencies, including the furthest 91.8 NRK P3 Bjerkreim @ 1094km up to 20dBf and strong stereo & RDS signal from Lyngdal @ 1020km, which eventually peaked to a superb 40dBf in next 30 minutes! This transmitter is incorrectly listed as just 3.95kW ERP, because it was few dB stronger than 88.3 NRK P2, that is listed as 30kW ERP.

Tropo was moving slowly east along the Norwegian coast. Bjerkreim faded down and Greipstad reached 38dBf on 92.5 NRK P2. I also checked vertical polarization and I found 98.6 Radio Sør @ 968km, which became my new POWER/DISTANCE record, with only 500W ERP! The following recording contains signal peak (which I heard immediately after tuning to 98.6) and some Norwegian talk mixing with semi-local Radio Niepokalanów on the same frequency. Both songs, Chinook Lamers – Dancing in Flames and Billy Idol – Rebel Yell, matched with the webstream. Additionaly, Arvid Husdal spotted a vocal ID “(…) hver tirsdag på Radio Sør.” at 00:40. Thanks a lot!

Tropo shortened from Norway to Sweden at night and Hörby produced 53dBf on 101.4 SR P4. I logged some low powers with RDS like 96.3 Guldkanalen @ 28dBf from the same location and 93.6 Radioactive from Tomelilla. Around 00:20 UTC I thought that I was listening to the same programme on both 96.3 and 93.6, as those stations were playing the same song: Terence Trent D’Arby – Sign Your Name, but with some delay. It was just a single accident in their playlists, though. It is also worth mentioning that Guldkanalen broadcasts some advertisements in their RDS PS: __GULD__ KANALEN_ __****__ _HORBY-_ _BIL.SE_ MAZDA_&_ __KIA___. The propagation weakened, so it was a good idea to stop DX-ing and sleep.

On the previous day evening there was no sign of tropo on 5GHz, except a very slight lift, up to 30-50km. The night was very foggy. Few minutes past noon local time, when the sky cleared up, I found network “ssmm”, which I recalled from a previous tropo from Czech Republic. This network was available at the same time with “inera.cz_vyhl_wc->170” on October 28th night. At this point I was pretty sure something big was going on. My suspicions were right. After a while “multi-laz2-ti-pln-wsch” network was found. Multi-Net is an ISP from Bielsko-Biała and surrounding areas. The distance from Płock is around 300km.

Just a hour later I logged two interesting SSIDs: “bestnet2-sgt-airmax.pl-717170530” and “webbernartice” a few seconds later. At that time my antenna was rotating with a very low speed at CCW direction. Recently I have successfully identified bestnet network using Wigle database and its location is somewhere near Ząbkowice Śląskie. Therefore now, I am completely sure that a substring of the “webbernartice” name points to Bernartice village near Jesenik in Czech Republic! Radio name “bernartice-sever” also suggests a foreign location, as “sever” means north in Czech language. 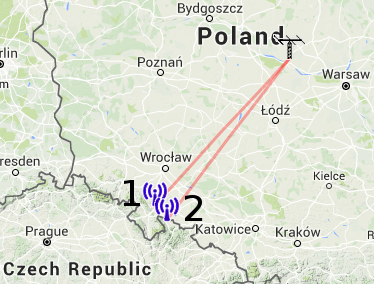 I noticed also another network br_sgdw-lutomi with signal level floating a bit up and down. I’m not sure where did this network come from. “Lutomi” word may mean Lutomia or Lutomierz. Both villages are placed near Wałbrzych and my antenna azimuth was estimated to be ±2° within them. Well… that might be again 300km or more, but this name is too imprecise. At one point the signal started to increase quite rapidly and peaked to very strong -72dBm. I guess this was probably some sort of a waveguide at the path between me and TX.

Meanwhile, I was checking the CCIR band on my XDR-F1HD. I discovered that the ducting path to Hörby moved more east at night, providing strong Emmaboda, Växjö, Nässjö and Jönköping. It was very, very selective, just few degrees of azimuth, precisely 3-4°. The signals were continuously getting stronger and stronger! 99.7 SR P3 from Emmaboda @ 537km peaked once to 62dBf – a historical signal level that allowed to listen to this station indoors with just a telescopic antenna with RDS.

In vertical on 103.9 I heard an instrumental, easy-listening music. Unfortunately without any jingles, just song after song. It was definitely not Radioactive from Ystad as usual, but P5 Höglandets Närradio from Nässjö @ 649km, which was also very strong – 99.0 SR P3 reached 53dBf. On 89.4 I logged Mix Megapol initially as Oskarshamn [2kW], which I have already received before. However, now I see it was very likely Nybro [0.2kW], as the propagation was very directional. In the afternoon, tropo shortened mostly to Poland with very strong signals at 200-300km. Swedish stations were audible too, but with much lower signal levels, like Emmaboda up to “just” 40 dBf.

In the afternoon I received lots of 5GHz WiFi signals from Poland. In the evening I noticed very distant network SSIDs again, including Bochnia and surroundings. For example, BC_LAP_PN is Łapczyca at distance ~295km. Full log of 5GHz WiFi networks received on November 3rd is available here. It does not include local networks. 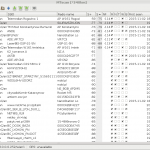 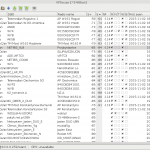 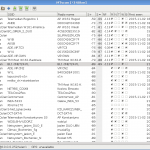 At night I found strong Lithuania and Belarus. Lietus from Kaunas on 103.5 peaked over my semi-local Radio Victoria. I also logged 106.0 BR Kanal Kultura from Osveya, very close to the Russian border, but nothing from the Russia itself.

In the early morning I heard weak Norway on 93.7 NRK P2 from Hovdefjell @ 970km and some interesting low powers from Sweden. As the time was passing, tropo was getting stronger and was moving from Sweden through Denmark to Germany. In the afternoon, signals reached extremely high levels. More details are included in a log below – it was definitely the strongest tropo from NW direction that I have ever seen.

I successfully identified almost all stations with some help from Maciek (thx!), except a single station on 107.8 from Denmark. Fortunately, MrDabrajo on YouTube identified it as Radio Odsherred, broadcasting Café Danmark programme. Many thanks!

In the evening and night, tropo shortened to Germany, providing extreme signals like 60-62dBf on Berlin 100kW stations. I took my Dual Dab 4 and 99.7 Antenne Brandenburg @ 429km was audible with a telescopic antenna placed on the floor!! With this antenna in my hand, 99.7 produced a stereo + dynamic RDS signal indoors. Indeed – this was the strongest tropo from Germany I have ever experienced. 106.8 Jazz Radio reached stereo+RDS level over Radio Maryja on the same frequency. I have received this station only during Poznań/Śrem maintenance before (via aircraft scatter).

Kreuzberg produced 31dBf signal of 88vier at night, which was sufficient for RDS reception: 152E _88vier_. Very impressive, as I have received this station up to noisy mono before.

At night I checked tropo forecast and before sleep I left my XDR with the frequency scheduler set to some OIRT stations from Ukraine. In the morning I quickly discovered Kyiv on my overnight recording! It appeared around 6:30 UTC for the first time on 71.30 and was still audible when I woke up around 8:30 UTC. However, it looks like I missed the signal peak. Anyway, I also logged a few other frequencies from this location.

Next day also brought (…no surprise) a very strong propagation. However, this time it was just some sort of a local tropo. At one point I noticed that some stations, which use other frequencies for a FM relay, were broadcasting interfered signal!

I also received a few WiFi networks from Zgierz (SSIDs: SBCOR, TEA-Dos2Ros) and Łódź (SSIDs: nano1, M_Vera) at ~90km distances in the evening.

Next day, November 7th, brought one of the most terrible conditions I can recall – a negative refraction. Regular reception, like Warsaw/PKiN, with 1kW stations that always are solid over 33-35dBf, were fading down below 10dBf!

Well… I can certainly say it was definitely the longest lasting tropo opening I have ever experienced. Starting from October 27th to November 6th – that’s 10 days of tropo with a short break on October 29th.