Another tropospheric ducting propagation this month developed on October 30 and 31 night. This time I didn’t expect anything special at all. I was busy all evening and I was about to sleep, however I saw the tropo forecasts. Both of them directed my attention to Ukraine, which is mostly unexplored country in terms of a radio reception for us – DXers in Poland. There are two main reasons. Firstly, propagation from east and south-east occurs the least frequently. Secondly, a majority of stations use low transmit power and poor broadcasting locations. 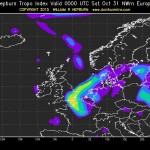 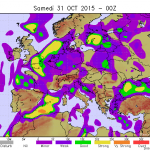 Meanwhile I noticed a very strong 103.3 UR 1 (up to 35dBf!), which I initially identified as Skole, listed on FMLIST as the only one transmitter in this part of Ukraine. Now, according to the UKRTVR website, I see that 103.3 is a newly launched UR1 transmitter in Lviv.

I also logged 106.7 Radio Nezalezhnist’ and 107.2 Radio Vgolos for the first time. On 92.5 I heard an unintelligible talk. I checked UR3 Kultura webstream but I could not match it with my reception. Anyway, I don’t see any other candidate for this DX, except an unlikely Moldova Tineret. Because of a very wide deviation on this frequency and a semi-local 92.6 Radio Zet from Łódź, I was not able to extract a single word from the following recording. There is also a short snippet of a music (jingle?) at 1:36.

Few minutes later I checked the OIRT band in a horizontal polarization. Körner 19.3 is more predictable than 2×9-el for the out-of-band reception, as this is only a single antenna. However, the F/R gain transition occurs at the middle of OIRT band (actually, a slightly lower). Therefore, reception of frequencies below 68MHz is best when directed backwards – the reflectors act as directors for a longer wavelength. Over 68MHz, the antenna should be pointed normally.

I found a weak signal on 70.91. This frequency is usually occupied with BR 1 from Brest, which, however, is being powered down every night. I compared this signal with 68.24 and it turned out to be R.Mariya from Vinnytsya, my new ODX @ 712km from Ukraine!

Tropo also brought Ivano-Frankivsk on 71.24 UR1 and 72.02 Karpaty FM in vertical. I have received this location only via aircraft scatter using a dedicated 9-el OIRT antenna in the past.

New tropo recordings from Ukraine are available in my log: http://konrad.fmdx.pl/?q=itu&id=UKR

When I woke up in the morning, there was nothing left from Ukraine. The sky was filled with a fog. I detected few WiFi networks via tropospheric ducting, including Tomaszów Mazowiecki and surroundings (~120km). You can read more about my 5GHz experiences in a previous article. At one point I also found an interestingly named network: “radio_zel-kunow” with radio name “radio zeleznik” and I wrote down the current antenna azimuth.

There are three villages near Nowy Sącz with such name: Żeleźnikowa Wielka, Żeleźnikowa Mała and Zagórze Żeleźnikowskie, which are at an azimuth of ~169°, that is still within -3dB antenna beamwidth of my reception. Moreover, there is also a place called Kunów very close to these villages. I measured distance over 340km, therefore that would be my new tropo WiFi ODX, . What about forecasts? They confirm the possibility of such DX with a ducting path arranged along the lines of an equal pressure. Update: location of this network has been confirmed: Analiza odbioru sieci WiFi 5GHz – 346km (Polish language). 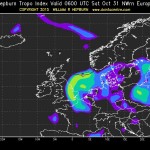 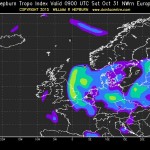 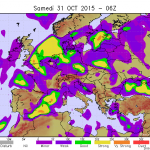 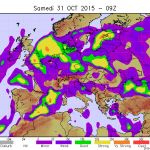 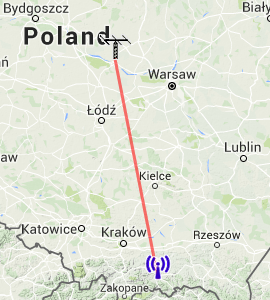 On the CCIR band I noticed some strong signals from Kaunas with full RDS on many frequencies: 102.1 LRT Radijas, 96.2 LRT Klasika, 104.1 ZIP FM, 97.6 M-1 Plius, 90.3 Classic Rock FM. Together with Lithuania I also logged some Finnish signals from Turku @ 881km. About 30 minutes later Yle1 89.8 and 98.2 Yle X3M produced RDS level for the first time ever! 103.9 Nova required a bit stronger signal for RDS, due to interferences from other stations, but it finally reached a sufficient level in another 30 minutes.

After the maximum peak around 12:30 UTC, all Finnish stations started to fade down. This was the strongest tropo from Finland I’ve ever seen, but of course not the furthest. I received 100.7 Radio Kuku from Estonia, as the duct had shortened. It should be noted that this station has a very high RDS subcarrier injection level and I got full RDS PS with just a 14dBf signal (with an additional low noise preamp).

In the afternoon I noticed logs between the Netherlands and Poland. This was a good sign to check west on vertical antenna. Groningen @ 883km was already up with an almost noise-free signal on 97.5. Smilde @ 899km reached up to 20dBf level on 88.0. I have received these stations before, so I checked other frequencies. On 89.1 I heard weak “Radio NL” jingle and a bit more intelligible music! 97.5 Radio Noord peaked once to 23dBf – the strongest signal from the Netherlands ever! Unfortunately, this was still not enough to produce RDS at my location… maybe next time. 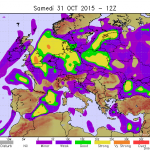 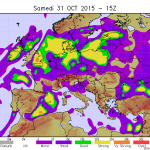 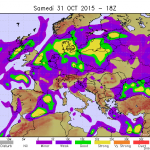 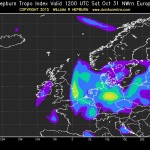 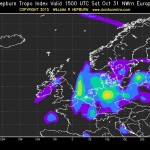 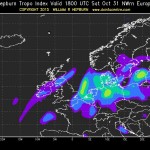 In the evening some German stations were still remaining, like 105.6 delta radio with RDS. On the next day, November 1, despite of interesting forecasts, tropo brought only very strong Grodno from Belarus.