On Thursday, August 16, 2018, our team visited Dylewska Góra. The trip was somewhat spontaneous, although we have been considering it for a long time. Weather forecasts looked good, so in the evening of the day before we decided to visit this remarkably interesting place in the Warmian-Masurian Voivodeship, Poland.

Dylewska Góra is the highest hill of Wzgórza Dylewskie and of the entire north-eastern Poland. The peak with an elevation of 312 m ASL is located in Wysoka Wieś, south of Ostróda. There are three interesting objects there:

Nearby, one can also notice some residential buildings and farmlands. 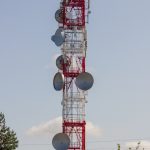 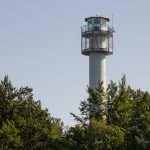 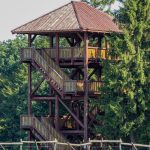 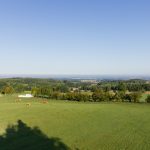 Unfortunately, the 37-meter high concrete observation tower is not available to tourists. The alternative wooden tower is much lower and does not provide a full view around the hill, because the eastern view is obstructed by tall trees. Access by car is possible to the very end. In the immediate vicinity of the tower there is no place to park though. An undoubted advantage is the possibility of getting there at any time of day or night, as the entrance to the wooden tower is free and available to everyone. It was very important for us, because we wanted to catch the morning inversion that extends the standard radio range in some way…

We took some equipment for 5 GHz, including: 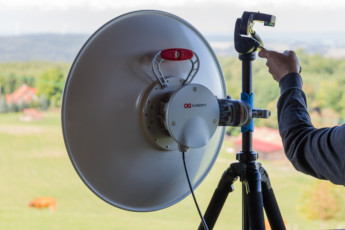 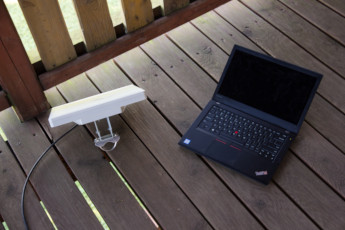 In order to install the parabolic dish antenna on a tripod, a special plastic cover was made from the water pipe, so as not to scratch or damage the tripod by screwing the mount.

We arrived there around 6:45 AM, but after we set up all the equipment it was already 7 o’clock. We could observe a well-visible inversion layer just above the horizon, which we recorded in the pictures below. Admiring the views from this place, we immediately noticed three wind turbines next to each other. They are located about 10-12 km from the observation tower on the azimuth of 274 – 276 °, slightly south of the village of Różental. In the distance you can see many more of them. 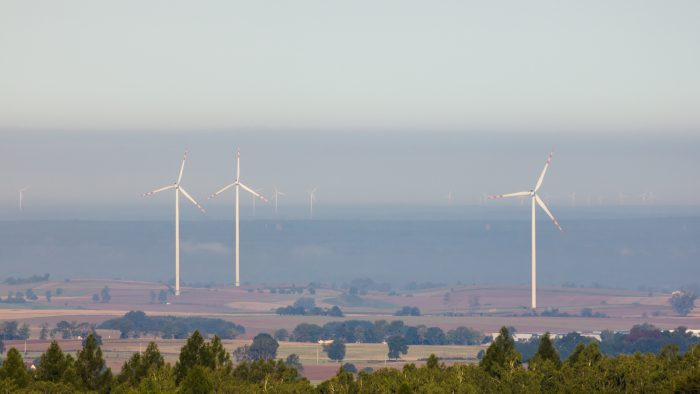 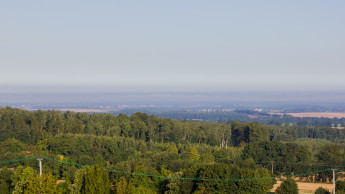 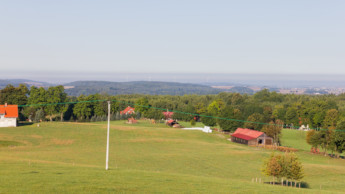 In the morning it was quite chilly, so warm clothing was essential. The lookout tower is roofed, so were in the shadow. At first, there was a slight wind which later disappeared. After mounting the antenna on a tripod, we logged a large amount of networks from the vicinity of Toruń, Bydgoszcz (110-140 km), as well as Gdańsk, Gdynia, Władysławowo and Hel Peninsula (120-170 km).

On the spot, it turned out that the southern direction, which is most interesting to us, is obscured by trees. In the distance you can see the forest, on a different, lower hill. Furthermore, there are two large trees near the access road. However, some Wi-Fi networks from Łęg Probostwo and Bielsk near Płock (94-98 km) were logged towards the south (to the left of that two trees), so the horizon in this direction is not so bad. 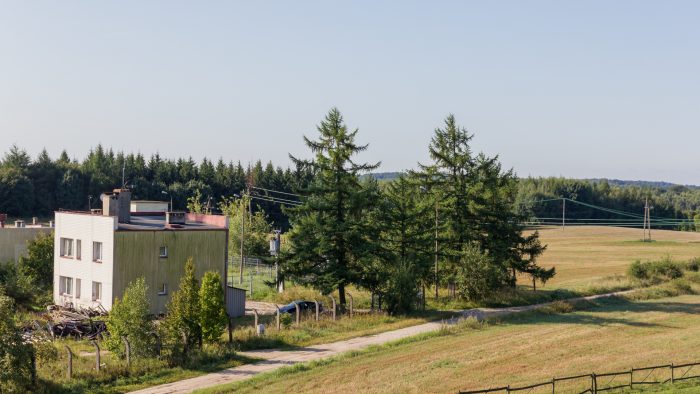 We could distinguish three paths of the tropospheric ducting propagation – southern, western and north-western. Under such weather conditions in the troposphere, the distances from which the signals appear usually increase with time, and then the inversion fades away and all the signals rapidly disappear. This is what happened this time, too. We were scanning from 7 to 9:30 AM, but after 9 o’clock almost no new networks appeared. The peak of propagation occurred between 8 and 9 AM. The most interesting direction turned out to be the azimuth between two nearby trees (mentioned above) in the direction of Łódź and its victinity – Zgierz, Pabianice, and … Bełchatów! 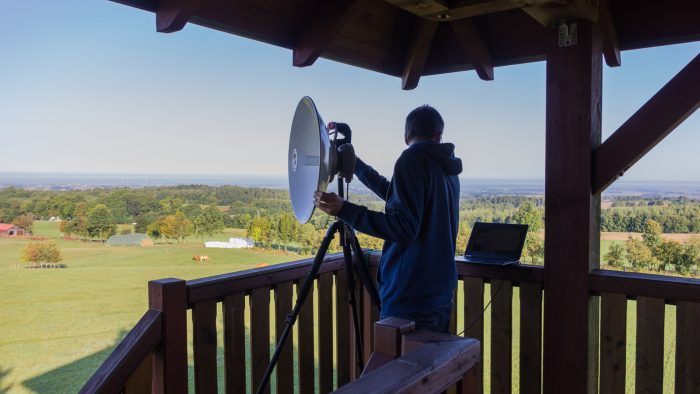 The 5 GHz band is relatively empty here. There are no strong Wi-Fi networks nearby. The highest signal we logged was vlan_smykowko3 (-55 dBm, approx. 7-8 km).

Here is a list of initially identified farthest networks.

According to the information on SZYBKI-NET ISP website, the range of this network covers the Bełchatów area, so it was most likely the furthest distance obtained. All of the above networks were received using UltraDish antenna, and additionally, KOM-NORTH-SZYBKI-NET was also logged with slightly lower signal using the QRT panel antenna.

As the strength of radio signals from the north-west direction had increased significantly, we logged two indoor wireless routers. The first of them named Orange_Swiatlowod_1B50_5GHz was available between 7:48 and 7:50 AM. Unfortunately, the network address is not present in the Wigle database, so currently it is not possible to determine the location. Looking at other networks that were logged at that time (as can be seen in the screenshot below), it is very likely that the signal came from Gdańsk or Gdynia.

Update – we managed to find the origin of the signal using Google geolocation service. Orange_Swiatlowod_1B50_5GHz matches with Kalinowa (± 1247 m), Logitus pl (± 268 m) and jarsat777 (± 608 m) networks. The distance is about 126 km and it is Gdańsk, or more precisely the district of Piecki-Migowo or Jasień. 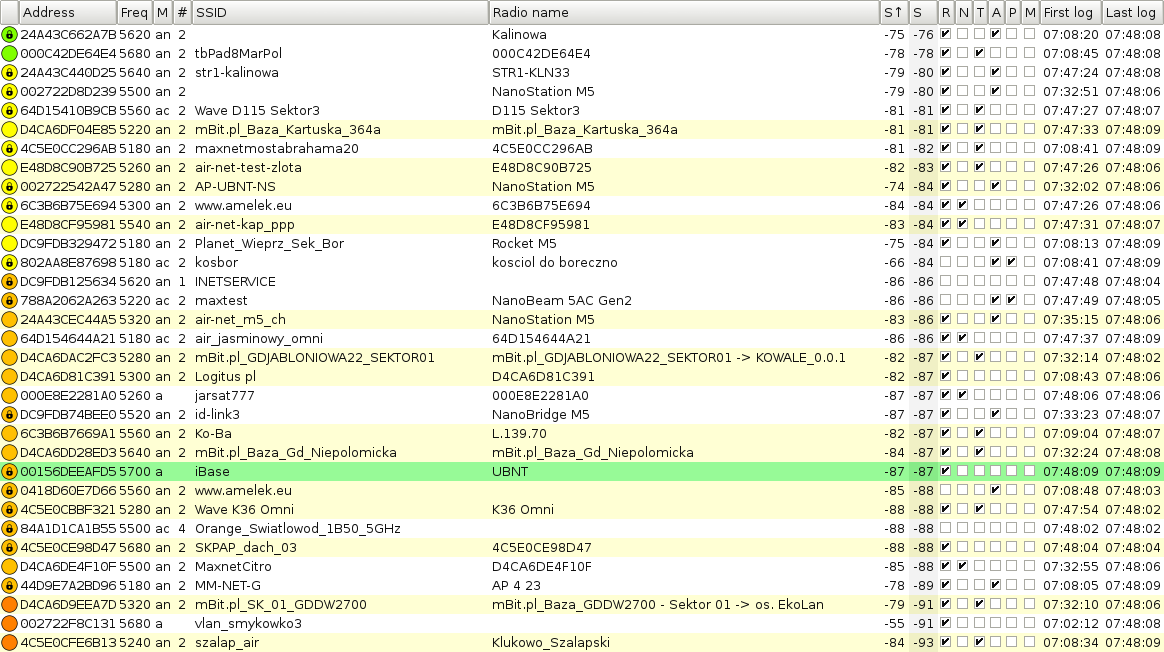 Another indoor wireless network UPC385838C was logged at 9:03 AM. This clue is pretty straighforward, as the BSSID address is present in the Wigle database. The distance to the point indicated at Chwarznieńska Street in Gdynia (the Witomino district) is exactly 141.5 km. Looking at the satellite view or Street View one can notice some high-rise buildings – this network is probably from there.

Compal and Arris domestic wireless routers supplied by ISPs are characterized by high transmit power within the 5 GHz band. According to FCC tests, even above 250-500 mW. The possibility of logging indoor networks via tropospheric propagation has already been reported in a stationary manner (read more: Spring 2018: new Wi-Fi DX 5 GHz records). In addition to the above-mentioned Orange and UPC networks, we also logged three Sagemcom (FunBox) and two Huawei wireless routers. However, these signals were present all the time, so these are just local networks from nearby houses.

Out of the stronger signals, one can notice Multi-IP Mrzezino S1 network, which reached up to -73 dBm at a distance of 155 km. This place is located between Gdynia and Władysławowo. It is worth noting that the propagation conditions were not extremely good. This is just a typical morning inversion. I wonder what you can pick up here during strong tropospheric ducting propagation…? 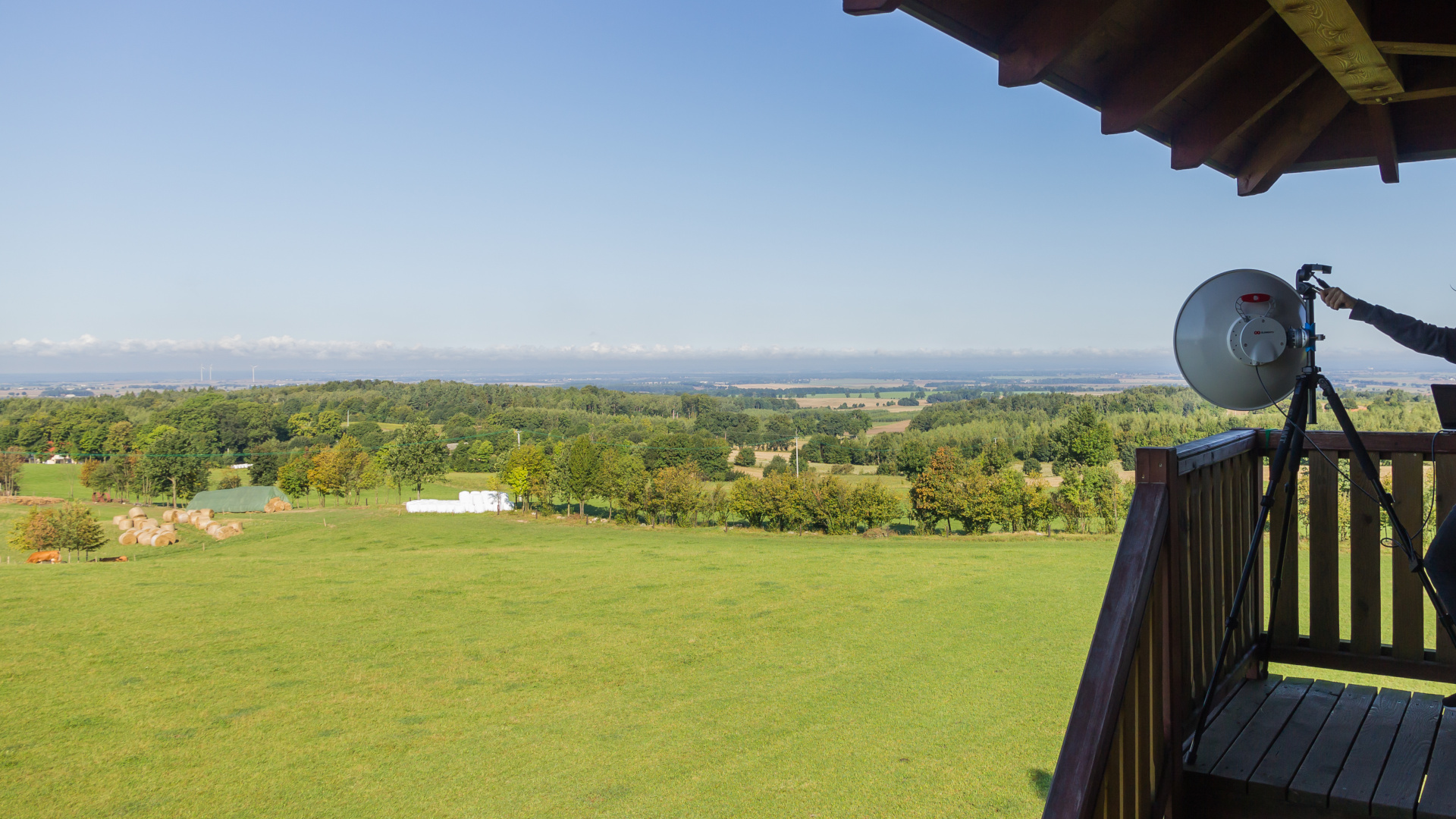 In total, we logged over 700 networks, but only less than 50% of them were successfully identified. The map below shows the received signals and presents three tropospheric ducting paths. To see the interactive version, click the map. The full log can be found at: https://wifi.fmdx.pl/logs/dylewska 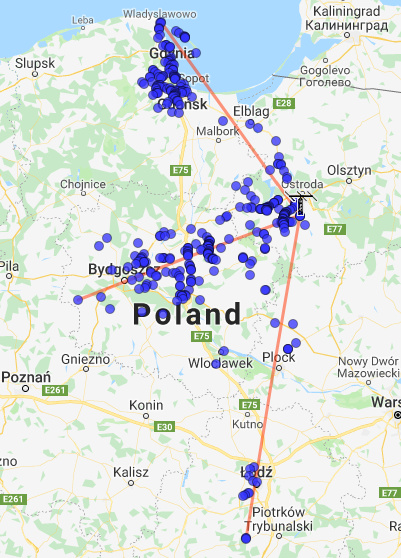 Here is a panorama of Dylewska Góra towards the south-west, west and north-west. For best experience, open the following photo in a new tab or window.

The theoretical optical visibility can be traced on the HeyWhatsThat website. The highest structure visible from this place is RTON (Radiowo-Telewizyjny Ośrodek Nadawczy) Iława – Kisielice, i.e. a radio tower with a height of 320 meters.

We successfully highlighted the outline of this tower by greatly boosting the contrast using darktable software. The distance is 48.2 km, and the azimuth is 278.7°. Wind turbines in the background form a wind farm in Łodygów (51-52 km). Iława is in the foreground. The chimney is only at half of the distance, more precisely 24.7 km.