What could go wrong if you buy a broken retro machine for cheap just to repair it and make it shine again with VIC-IIe colors and sing with glorius 3 channel SID chip? It’s not as easy task as I thought earlier and this repair went for much longer and costed me way more as compared to my previous Commodore 64c repair. Despite all the time, money and effort I put into it I don’t regret it at all. This repair allowed me to learn A LOT about electronics and electronic repair. 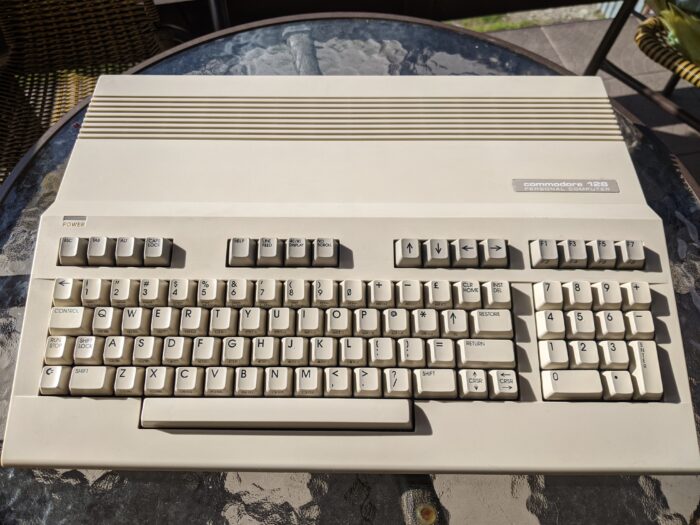 At first I’d like to answer a question, why Commodore?

Before 1989 Poland was part of eastern block strictly controlled by soviets, therefore any free speech and free market efforts were deemed by the government as something potentially harmful, however life here wasn’t as harsh as in other eastern block countries. Computers back then were viewed as some funky novelty. No wonder when a “cheap” 8-bit micros like a Commodore 64 or Sinclair ZX Spectrum could cost ones yearly earnings and you couldn’t just buy one in a shop. These machines were quite often imported by individuals from West Germany (usually West Berlin) but still it wasn’t an easy task considering export bans and other issues.

Sometimes those computers found their way into broader public. A breadbin Commodore 64 was used with a MIDI cartridge by Polish musical band Kombi (picture, video). A group of astronomers in Toruń city used Sinclair ZX Spectrum and custom hardware including TV transmitter to lock into public television broadcast (video sync pulses) and transmit anti-government texts and slogans (pictures and explanation).

A year 1989 was a moment when eastern block and the soviet union began falling apart making space for more independent countries. The whole economic, political and social transformation from socialism into democracy and free market economy created a lot of hope for the people. This transformation wasn’t quick and easy as many people lost their jobs, some factories were sold or closed due to various reasons (political corruption, foregin companies buying out and closing arising competition, inability to operate in free market economy, etc.). These times where computers were seen as a novelty have passed and now everyone was conscious about importance of computers in modern world and modern economy.

Our first family computer was a Commodore 64c with peripherials including amber Philips monochrome monitor, quickshot joystick, datasette, a couple of cartridges and a lot of tapes with games and programmes. It was already outdated, but most affordable at that time. Also anyone in our neighbourhood owned one so it was an obvious choice. Commodore Amiga’s were quite pricey and IBM-PC/clones seemed out of reach.

Soon the market was flooded with cheap used or decomissioned PC machines. I remember the time when my father brought a 286 PC from his workplace and this spawned a complete new adventure and experience. An idea that you could store your programs and games inside PC on a hard drive was something out of the world for someone juggling tapes in a Commodore 64. PC-s were absolutely flexible and you could upgrade your computer with new components year after year without buying a whole new machine. For me this marks the end of 8-bit and 16-bit micros manufacturers, as those cheap machines were hardly expandable.

At some point Commodore 64 became my private machine while my brother was more interested in our PC. Sadly our C64c has eventually died of known disease called “PSU of death”. When I was young teenager I have tried repairing the motherboard but probably made things even worse.

Recently, a year or two years ago I’ve found a beat up Commodore 64c (short) board in a wardrobe and decided to recreate a new working machine using parts from this mainboard and a broken C64 found somewhere on the internet. This whole operation resulted in a “new” working machine I’m very happy with. As it turned out SID chip was flaming hot when 9V DC was supplied, but VIC-II chip from my broken mainboard is indeed absolutely working.

When I was younger I searched the internet looking at other Commodore products and found this weird machine called Commodore 128. I say it was weird because at similar time Commodore released it’s first Amiga computer. I was amazed by Commodore 128 as it was a mysterious machine to me with all the enchantments it posessed (hi res graphics, 128KB of RAM, 2MHz cpu, Z80 and more), yet it was still backwards compatible with old Commodore 64.

Earlier this year I have bought a cheap broken Commodore 128 machine on ebay from an italian seller. An offer description stated that the machine turns on with a blank screen. I thought it could be RAM related or something with a VIC-IIe chip. Anyway I bought it and soon the package arrived.

First I have checked that beefy power supply and decided to scrape it as 5V reading was somewhere over 5.2V with hooked up machine and the internals didn’t look good. I did used it for 9V AC line and used another 5V DC power supply until I bought a modern PSU recreation with 9V AC and 5V DC lines together with round to square plug adapter.

At first I have checked RAM chips but everything seemed OK, I did replaced them with a batch of 4164’s but it didn’t change anything. I have checked VDC output or tried booting into C64 mode, but with no luck. Soon I was poking with an oscilloscope around MMU chip. Convinced that it was probably MMU chip failure I did order a replacement, however replacing MMU chip did absolutely nothing. The computer was still turning on with a black screen.

The next obvious step to me was a PLA chip. My friends were telling me it’s definitely not PLA chip, but I did order Backbit PLAster 128 (a fpga/cpld? PLA recreation). This time the computer did boot into … garbage on the screen, sort of, because once every couple resets it did show something on the screen. Most of the time Z80 cpu which starts first on a Commodore 128 didn’t even made into 6502 booting stage.

After a long time of poking around the mainboard I have finally found a way to test what is going on. Since my Hantek DSO1060 oscilloscope allows me to overlay output from both probes I could check if the signals on a data lines or address lines were the same across the motherboard. Bingo! I have found one problematic trace between U32 and U35. After making a bodge wire between those two pins computer still didn’t boot properly … but I could at least boot into C64 mode by holding commodore logo key! 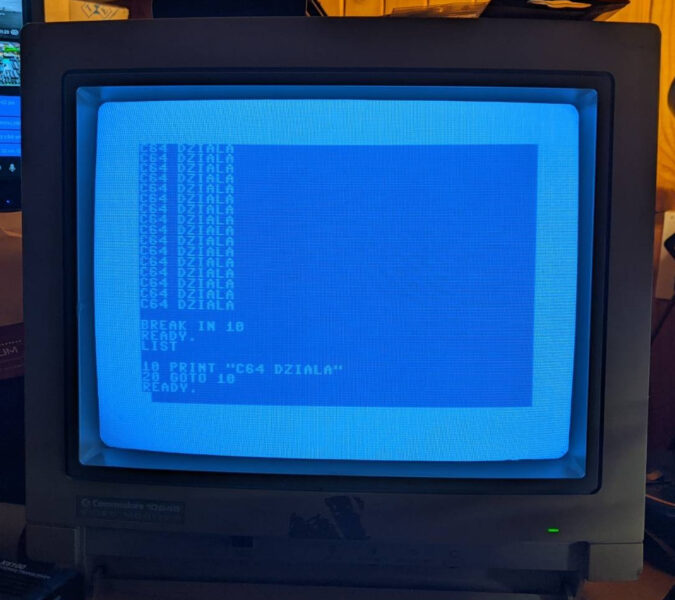 Well. In fact it doesn’t. A game Planet X2.1 loaded from a cartridge looks like trash after initial splash screen with Protovision logo. At least I knew VIC-IIe and SID chips are functional. 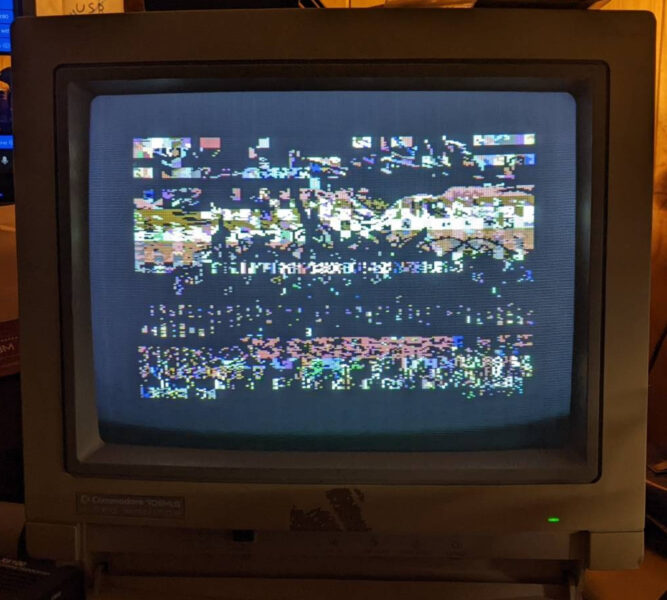 After spending evenings with oscilloscope and a multimeter, back side of a motherboard looked like a spider nest out of those bodge wires. When I first opened this computer, mainboard looked absolutely fine, but after weeks or months trying to get this thing working again I slowly began to realize this board is infested with hidden corrosion everywhere and soon a new problem happened. At some point VIC-IIe chip wasn’t even generating a coherent video output, instead it was flashing with random colors.

That was the time when I decided to do something absolutely crazy. At first I looked up for any modern C128 board recreations and found this site: https://c128.se/. Since these boards are not being sold anymore I found out there is also a github repository made by C128Neo creator, called Open128: https://github.com/jgrip/open128/. It was absolutely costly operation but I did order a few of those mainboards from PCBWay with an intention to sell some of them later.

Here is my complete recreation of C128 mainboard using original Commodore chips, 4164 RAMs, EPROM because original C128 ROM had some faults and brand new batches of 74 class ICs. You can notice temporary SwinSID and PLAster/128, but don’t worry, an original SID chip works absolutely fine. Most other components are also new except for some EMI filters, ferrite beads, a few caps, chokes and a few random components. 95% of non IC components here are completely new. 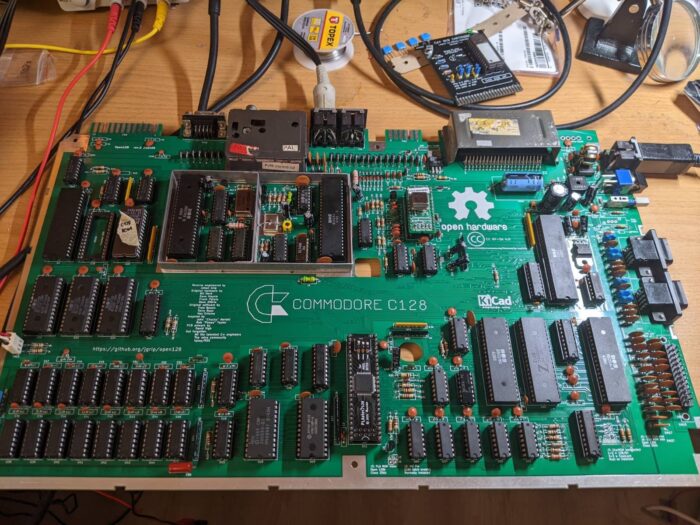 The computer still had flashing screen issue. At this point I was left with only two chips that could pose a problem. Either VIC-IIe was faulty or I broke PLA replacement, or it was already faulty from the start (who knows). I bought on ebay a new old stock Commodore 128 PLA from a former computer repair shop in the USA. I generally don’t believe some of those stories I read on ebay, but as it turned out … this chip was a mint quality MOS 8721R3 without even traces of being pulled out of a machine.

Did it worked? Well, take a look at those pictures: 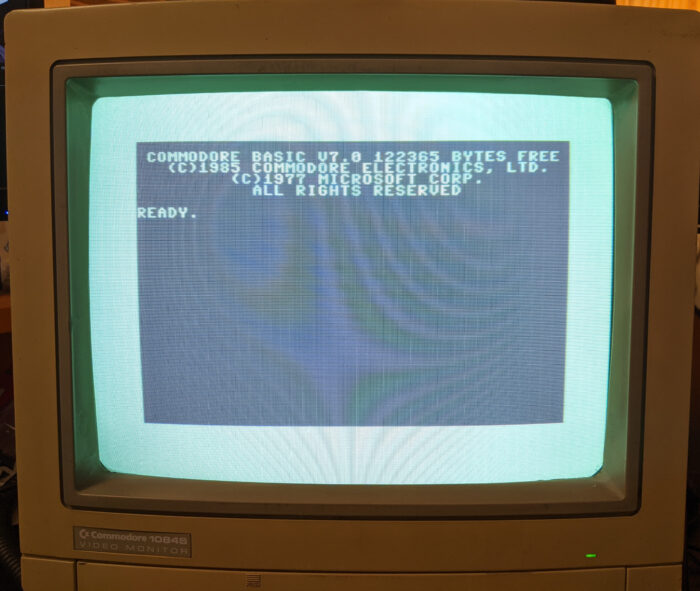 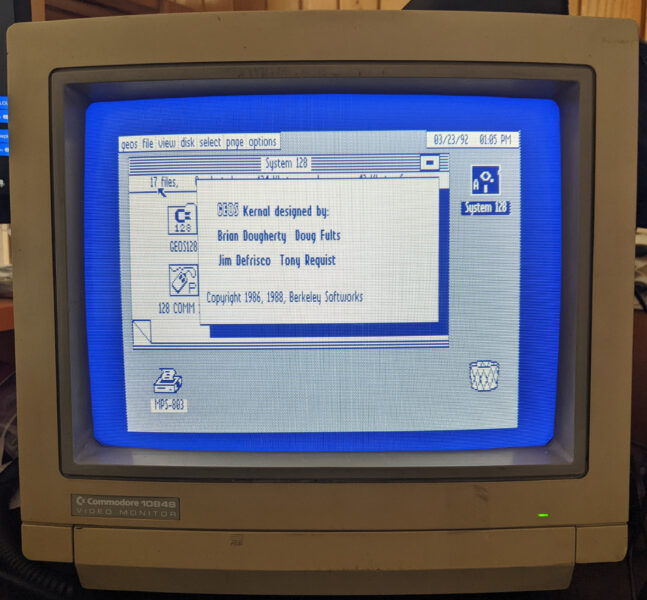 IT WAS PLA AND BOARD CORROSION THE ENTIRE TIME!!

Right now I’m a happy owner of two working Commodore machines, 64c and 128. C128 still has some tiny issues like intermittent 80COL and CAPS keyboard switches. Also I have some suspicions about top left 6526A chip, but diagnostics cartridge with diagnostics harness didn’t found anything wrong.

My next patient waiting to be rescued: 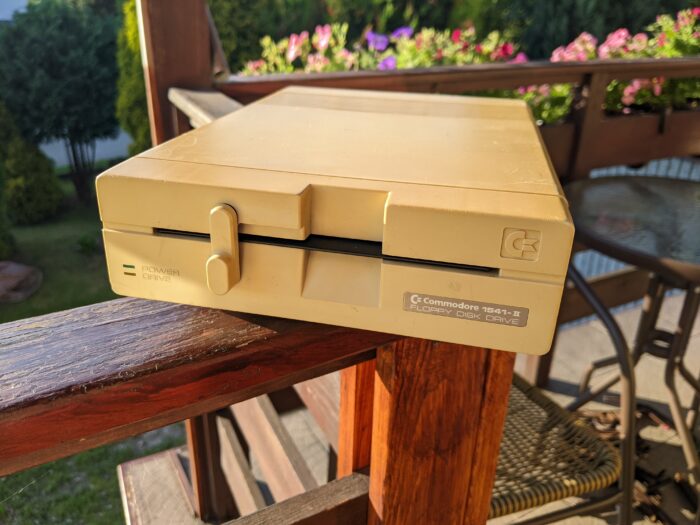