New version of XDR-GTK is backward compatible with previous version of XDR-I2C (2014-08-06), but some new features will not work (stereo squelch, stereo pilot estimation…). To perform a full upgrade, download the latest XDR-I2C (2015-01-22) and upload it using Arduino IDE to the Seeeduino board. Don’t forget to replace the tuner alignment settings file (align.ino) with your own values. 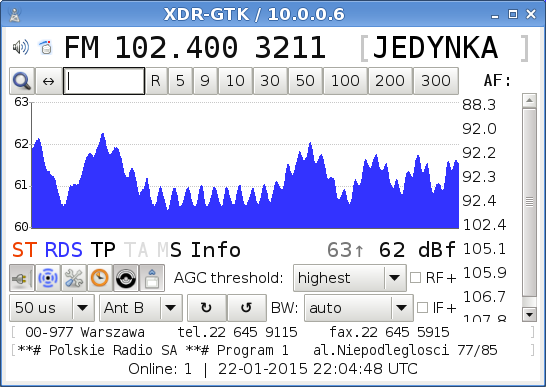 The frequency scheduler tunes to the frequencies defined in settings for a specified time. RDS logging writes each RDS change (PI, AF, PS, RT, PTY, ECC) to a file in logs directory.

Olivier Guillaume has suggested another mode for the squelch function based on a stereo pilot detection. It can be enabled by scrolling down over the squelch button in XDR-GTK. The default ‘ST’ indicator threshold is now set to 3.75kHz (5% of ±75kHz deviation). Experiments with the threshold gave me an idea how to measure the stereo pilot injection level directly from XDR-F1HD. It is simple – the threshold is set from 15 to 3kHz and each time the stereo indicator state is checked. If the pilot is found, the search is stopped. To speed up this process, I divided it into two parts – 15 to 3kHz in 1kHz step and then x+1kHz to x in 0.1kHz step.

Przemysław Korpas (SQ7JHV) has prepared some I/Q samples recorded with HDSDR on RTL-SDR using a professional signal generator. They contain a carrier and stereo pilot with injection level between 0…100kHz in 5kHz step. I linked HD-SDR with MpxTool via virtual audio cable and calibrated it with those samples. Mpxtool shows 6.58kHz injection on one of my local stations, while my meter on XDR shows almost all the time 6.6kHz injection and rarely 6.5kHz. On another station with 6.63kHz injection measured with Mpxtool, XDR shows 6.6kHz and sometimes 6.7kHz. I also would like to thank Mateusz Sośnicki for a comparative measurements using a professional FM Broadcast Analyzer. According to these tests, the stereo pilot level meter should be accurate within ±0.1kHz. Of course the signal must be clear and stable for reliable measurements. Slight multipath degrades it noticeably. To check the pilot injection click the ST indicator.