This tropo was very long awaited. Actually, 2013 was not too generous for us in Poland… maybe except my receptions from Finland. This time distant stations were strong, very strong! I haven’t seen such high signal levels before. It started on 11th December morning with stereo signals from Steinkimmen. Maybe nothing special but when I left my home I realised that it was… raining.

I was busy that day, however I was able to check the conditions remotely. At noon, Steinkimmen and Dannenberg were already peaking up to 40dBf! That’s over 3 bars on the XDR-F1HD stock scale. I arrived to my QTH after 19 UTC. Tropospheric lift reached almost half of the German territory and partially Denmark. The following list of received stations contains only 450+ km locations.

By the way, I haven’t tracked the maximal signal levels of each station, so the dBf levels mentioned here may not be exactly the highest peaks of this tropo opening.

Next day morning, 12th December, tropo extended to the northern directions. Göteborg from Sweden arrived with RDS. Borlänge (900+km) was also here, but I think that the most interesting reception was from Denmark. I found few low-powers in vertical polarisation.

There was also a second tropo path, quite directional. I think it was related to the reception from Oschatz in the night. Paths shortened to Löbau with very high signals, again up to 50dBf. Radio Lausitz was clearly audible over semi-local Radio Hit 107.6 (40km). I also received RDS on 103.0 Deutschlandradio Kultur for the first time. After a while, the lift moved more to the south and brought low powers from Czech Republic. One more thing should be noted. Kiss Morava 101.1 from Czech Republic was also audible in the opposite polarisation at opposite direction (Körner 19.3 pointing at north)… how!? After checking 2x 9-el in V it came out that this location, Frýdek-Místek, has beaten all records and reached 53dBf (1kW ERP 345km).

The tropospheric propagation was travelling from west to east. According to the Hepburn’s forecast maps we were expecting Finland to appear in the evening. Eventually only Turku was in, but other attractions were much more interesting. Estonia with RDS and Russia on OIRT, but again on wrong antenna – Körner 19.3. In the night tropo moved over Belarus and started to disappear… 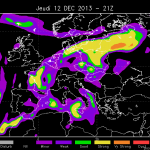 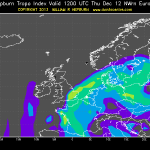 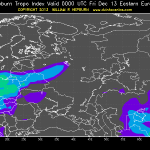 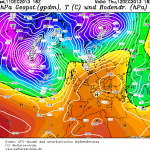 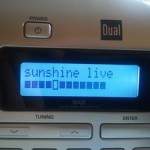 … who did say ‘disappear’?! Well, when I woke up, 70.22 BR1 Salihorsk was still here, but very weak. I gave tropo another chance and I started checking the CCIR band. Something was wrong. When I was going to sleep, Körner was pointing Belarus. So how was it possible to receive Berliner Rundfunk on 91.4 with RDS and clear stereo signal in this opposite direction?

After rotating the antenna to west I understood everything – Berlin was extremely STRONG. 60dBf on 100kWatts!! I quickly took my another radio tuner, but this time for DAB reception. Scanning revealed 47 digital stations, including 3 MUXes from Germany. Of course the antenna was still Körner 19.3 (btw, CCIR, OIRT, DAB… what’s gonna be next?). Wittenberg was also strong and 100.5 WDR4 from Teutoburger Wald almost noise free. Reception on FM & DAB lasted for few hours and then tropo faded away, along with upcoming cold front with rain.