Autumn is well known as a perfect season for tropospheric ducting. First notable long-path ducting occurred this year on September 7, but it was just a short propagation. This time, good tropo conditions lasted much longer. Everything started in the evening on October 18 with strong tropo from Lithuania and Belarus. I also got some stations on OIRT band (66 – 74MHz) including Babrujsk (~650km, 73.01 stereo O=5-). Actually I don’t have any OIRT-dedicated antenna and my all receptions were made using Körner 19.3. Stations from Vilnius reached RDS & clear stereo signal (98.3, 102.6, 106.8). Although the distances were not so great, I have received some stations for the first time.

Next day was more interesting. Tropo from Lithuania faded away and I received only one new station in the morning from Belarus. However, another duct was building in the south-west and west direction. 105.7 SWR2 from Stuttgart at 858 km peaked to RDS PI quality in the afternoon! Votice from Czech Republic reached up to 50dBf, just like some semi-locals – quite difficult to attenuate even with huge antenna like 19.3. Propagation was very widespread in the evening. Stations from eastern Germany appeared with very high levels (stereo + RDS): Röbel, Marlow, Helpterberg, Berlin, Frankfurt/Oder, Belzig, Magdeburg, Wittenberg, Lepzig, Oschatz, Dresden and Löbau. Reception of low-power stations was also possible and tropo brought some interesing ones, like 95.9 radio corax. 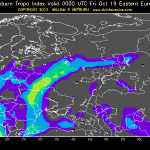 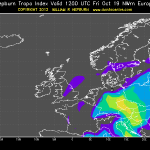 On Saturday tropo reached distant Belarus and Russia! It was my first reception from main Russia, not the Kaliningrad region which is available at any time via scatter or regular tropo. It was quite difficult at the beginning because of the simultaneous Es propagation on the OIRT band, but it quickly disappeared and all signals carried through an elevated duct were very stable. The following map with a overlay of the William Hepburn’s tropo forecast shows all OIRT transmitters that I received that day: 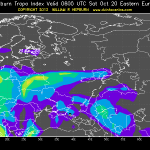 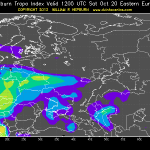 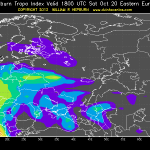 In the morning and noon reception from: Vyazma, Smogiri, Smolensk and other locations from Belarus. In the afternoon and evening: Glubokoye, Novosokolniki, Velikiye Luki and Braslaw. Maciek from Góra Kalwaria near Warsaw has also received Russian TXs and he reports logs on his blog. Besides eastern stations, there was also a strong signal from Austria (Linz, Weitra, Salzburg) and Czech Republic that day.

Sunday morning compared to the previous day was extremely boring. The only one notable station was 97.8 MDR Thüringen from Gera. It peaked many times to RDS quality during the day. Just like on Saturday, there was a strong and stable signal from Austria (Linz) and Czech Republic. In the evening Chemnitz and Remda came with RDS (105.6 MDR_JUMP, 100.7 _FIGARO_, 105.4 Hitr.RTL 92.8 MDR_SACH, etc…). Next day in the early morning all stations from Remda reached stereo & RDS quality. Even 107.6 ANT.THUE peaked over semi-local Radio Hit 1kW @ 45km V. Unfortunately I had to leave my QTH (oh no!), but thankfully I and my friends were able to remote control my tuner on-line! :-)

22th October was definitely the most interesting day of this tropo. Long-distance elevated ducting started around 8 UTC. Alan reported stereo reception of 92.7 hr3 Hardberg near Skalbmierz, Poland. He also checked remotely my XDR-F1HD and found it too. Unfortunately I was at university at that time, so everything I could do was to download the audio stream and check it later. Around noon Alan alerted about French station on 87.7 at my QTH. This frequency was empty because of a semi-local transmitter maintenance (Konin – Zółwieniec). Shortly after that Emel joined the remote DX-ing and he additionally found 95.0 & 101.4 from the same location – Strasbourg. He also received France Musique at his QTH (1000+ km), but the signal was extremely weak (O=1?). I had some free time between 11:30 and 13:00 UTC, so I took my earphones from a bag. Well… French signals have already faded away, but I found lots of SWR stations at 800-950km distances!

At the evening when I came back home (but not QTH) 94.9 and 105.7 SWR2 were still audible with the most stable signal levels. I also got Bornberg (90.8 & 103.1) for the first time, but reception lasted only few minutes. At 20 UTC the tropospheric duct reached Koblenz and 91.6 SWR 3 peaked to a nice stereo signal! Furthermore, at 21-00 UTC duct expanded to Saarland, 95.5 SR 3 reached RDS PI & partial PS (dynamic, why?!) quality. French frequencies were occupied by other stations, but I received 94.5 France Culture from Metz. PR2 from Opole, Poland quickly covered this distant signal and I was not able to null it again, because remote rotator control was not implemented yet… 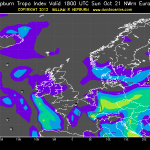 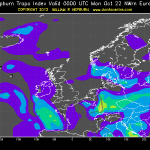 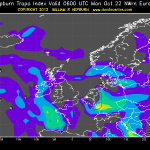 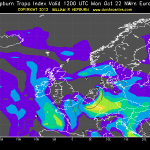 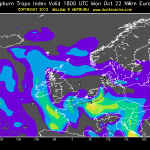 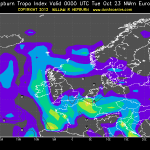 This was one of the most spectacular tropospheric ducting propagations. First of all – reception of Russian OIRT up to almost 1000km with an antenna for the 88-108 MHz band (Körner 19.3) and then double reception from France, in the morning and evening, also at about 1000km. Well… I think we will have to wait many years for similar conditions here in Poland! See more reports from Polish DX-ers:

Note: Lists in this article contain only stations that were received for the first time.