The forecasts suggested some upcoming long-range tropospheric ducting from Sweden, Norway and Finland in October. According to maps, as usually, the strongest tropo was expected over the Baltic Sea, with just marginal strength extending to my location. Nevertheless I was prepared to check the propagation conditions remotely. 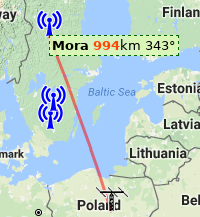 The ducting area was still expanding. Shortly I found a mysterious 99.0 SR P3 signal. There is a high power transmitter on the same frequency in Nässjö @ 649 km, but I could not find any other matching station from this site – 89.6 was empty and other frequencies were taken. Furthermore, I also logged 101.0 SR P4, which is similarly broadcasted from Vislanda @ 583 km, but again, I didn’t find any corresponding frequency from there. Thankfully SR P4 carried local program during my reception and I quickly ensured my thoughts with a P4 DALARNA vocal ID. That was enough to assume the reception on both frequencies from… Mora @ 994 km! At some point I also logged P4’s local PI code E624.

In parallel to this impressive tropo opening I noticed… an aurora. Some fluttery BBC signals appeared on the band, very easily distinguishable from the tropospheric reception. It was a good idea to take a break from DX-ing. Later in the afternoon I logged Riga with RDS, including 90.7, 91.5, 105.2 and marginal 89.8 Yle1 signal from Turku.

This direction is the worst for me in terms of tuner overloading. Körner 19.3 in horizontal polarization is heading my six local 60 kW ERP transmitters, with signals up to 87dBf. When the AGC threshold is set to high level, I can hear some intermodulations, including weak 100.7 (96.1 & 97.3 & 101.9). So, for best reception quality some attenuation was required, as can be seen on the following video.

It is also worth mentioning that the ducting layer was somewhat too thin for the whole 88-108 MHz. Stations on top of the band were much more in favour. Hudiksvall is a great example there with RDS only on 100.7.

As I had some spare time in the evening I observed other Ånge frequencies and this was a great idea. Together with 93.2 and 94.5 which I have logged already before, I heard 99.6 P3 (no Örebro on other freqs), 103.1 P4 (when PR Koszalin faded down) and 95.6 P2 (under my semi-loc Zet Bydgoszcz, 9kHz filter). All audio snippets are available in my tropo log. 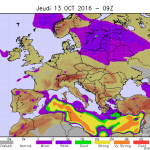 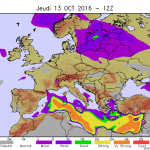 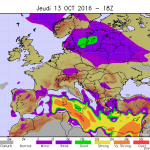 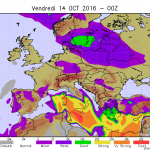 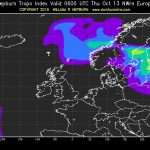 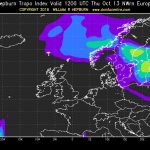 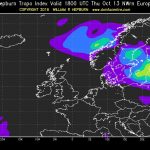 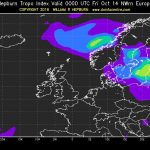 There was nothing left from this impressive tropo on the following day, at least in the morning and afternoon. The wind has intensified, so I thought this is the end. However, in the evening I logged another distant location from Sweden, Sveg @ 1087 km with classical 94.9 SR P2. Shortly I found 102.2 P4 and 97.9 P3. The long-range tropo was very unstable, just some weak signals in and out. I also heard Gävle, Ånge and Östhammar.

Sweden was not the only enhanced direction. I logged strong Klaipeda (almost 40dBf), weaker Latvia: Liepaja, Kuldīga, Dundaga and Belarus.

Late at night, around 2 UTC just before going to sleep, I turned the radio on for the last time and I found Swedish signals once again: Uddevalla, Ånge, Västerås, Östhammar. 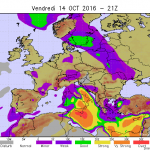 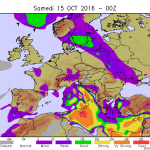 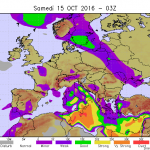 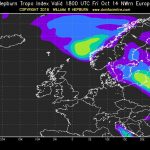 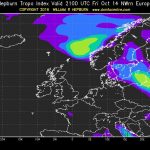 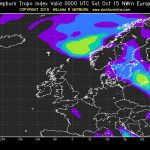 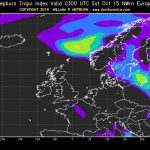 In the morning there was no sign of any distant station. I was checking the conditions from time to time, as there was some marginal chance according to the tropo forecasts. At some point I heard Scandinavian language on 99.5, which I initially (mis-)classified as… medium power Swedish station. This was very odd, as I didn’t find anything more on the band from Sweden. I quickly took my headphones on… and I realized this is not Sweden, but Jetta, Norway @ 1209 km!!

In just a moment I successfully matched my reception with NRK P2 webstream. Unfortunately the signal level was getting worse very quickly, with a peak of 13 dBf at the very beginning. This is my new ODX from Norway – 1209 km, which replaced the previous one – Bjerkreim @ 1094 km.

I also checked other frequencies from Jetta, but 95.9 was the only empty channel. I heard some unintelligible voices of NRK P1 there. I’d like to say big thanks to Maciek and Arvid Husdal for a preliminary identification based on language tone and phrasing. Arvid also pointed that NRK radio has a complete audio archive available on their website, so if it was really NRK P1, it can be somehow matched.

First of all I trimmed the first hour of Nitimen down and in a result I got only the second part, transmitted between 10:05 and 10:59 local time. Such audio file should match my reception starting from 44 min 55 sec. For a better waveform appearance I performed some denoising in Audacity.

Finally, I matched my reception with the trimmed Nitimen programme at 44 min 53 sec – almost exactly as expected! After some fine-tuning the offset after applying a low-pass filter (~250Hz) on both tracks I synchronized the sound. The following video presents four snippets, starting from an unmodified reception audio (third waveform), through a denoised signal (second waveform), the original NRK programme (1st waveform) and mixed (right channel) at the end with my denoised signal.

Because of the ongoing FM shutdown in Norway, I guess this could be the last chance for a reception from this country for me.

Well… is this a good bye, Norway?